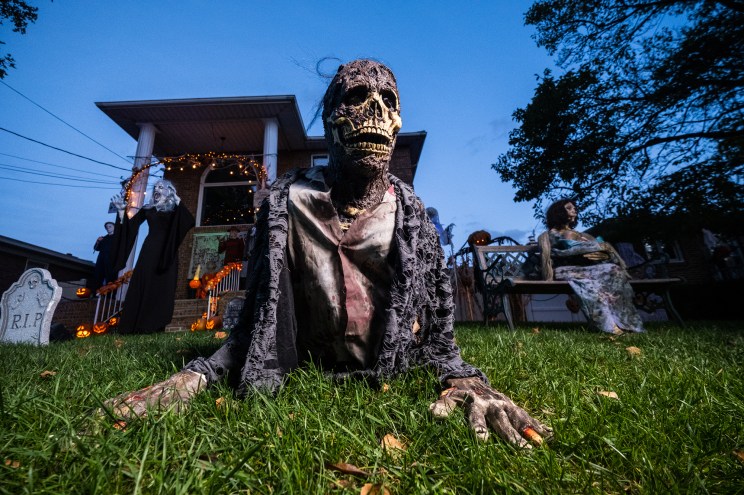 Thanks to COVID-19, 2020 has already been a terrifying year. And with trick-or-treating up in the air and walk-through haunted houses mostly closed to visitors, spooky street-side decor is more important than ever. Besides watching a scary movie at home, checking out creepy displays is one of the safest ways to get into the spirit of Halloween.

Thankfully, some locals are still going all out with elaborately scary Halloween decorations to spread some horrifying holiday cheer. From a virus-themed tableau in Queens to a 35-foot-tall inflated Michael Myers in New Jersey, these are the most terrifyingly over-the-top decorations in the tri-state area worth making the trek to see from a safe distance. 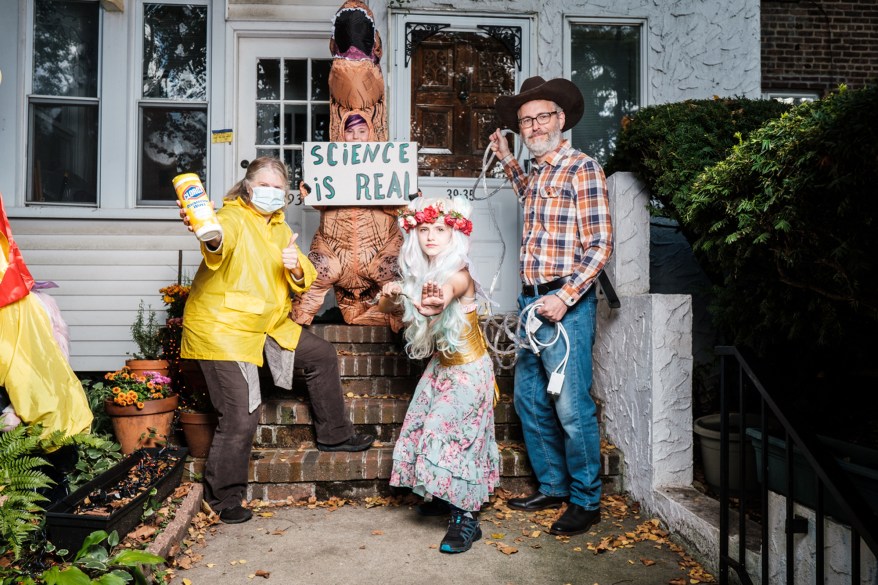 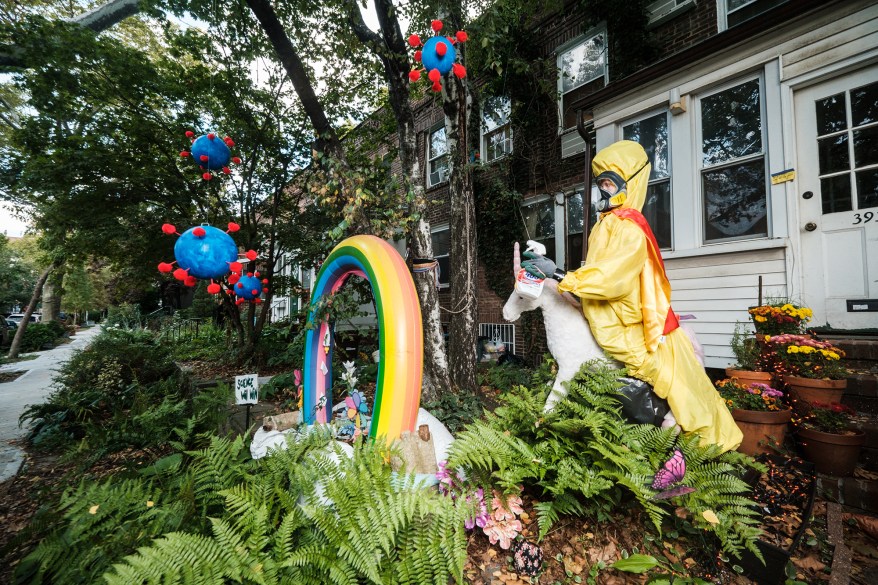 Julie Simonson always has a theme for her family’s Halloween display. So, when it came time to decide the decorations at their Sunnyside Gardens, Queens, home, they used the mom of two’s job as inspiration: Simonson works at Pfizer, a major pharmaceutical company developing a coronavirus vaccine.

“Originally, we had an ‘Alice in Wonderland’ theme planned,” said Simonson. “But COVID is really scary and made us change our minds. Although, we didn’t want it to be too dark.”

The 52 year old, along with her daughters Kira, 9, and Maya, 12, used the giant blowup rainbow they put up in March to spread cheer during the peak of the pandemic as inspiration.

“Kira suggested we have a superhero fighting COVID and call him Sanitizer Man, and I thought it was a great idea,” said Simonson. From there, the medical-outcomes specialist purchased a blowup doll and hazmat suit, mounted him on an oversize stuffed unicorn and crafted the molecular structure of the coronavirus using Styrofoam balls and golf tees to complete the scary-yet-hopeful display.

“I was expecting around 2,000 trick-or-treaters this year,” she said. “But since we’re not giving out candy, [this display] is like a touchless sort of joy.” 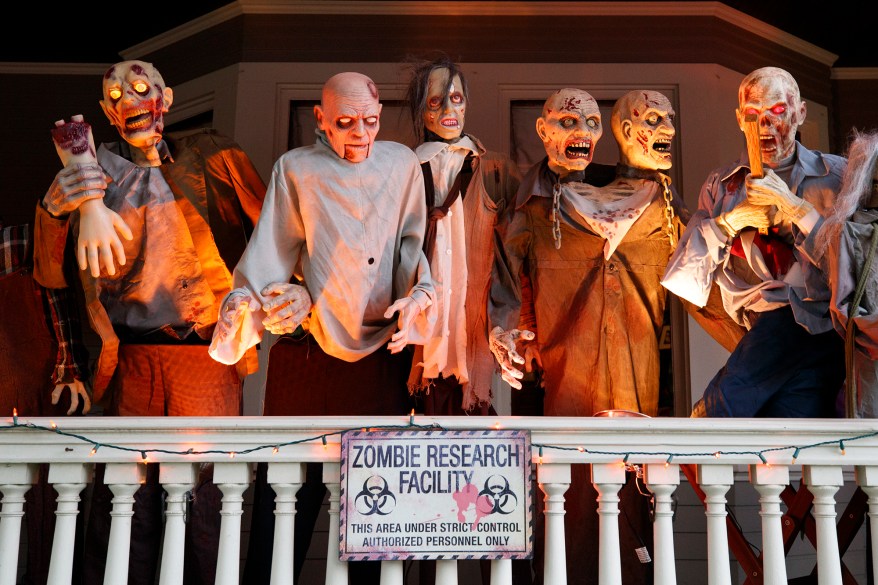 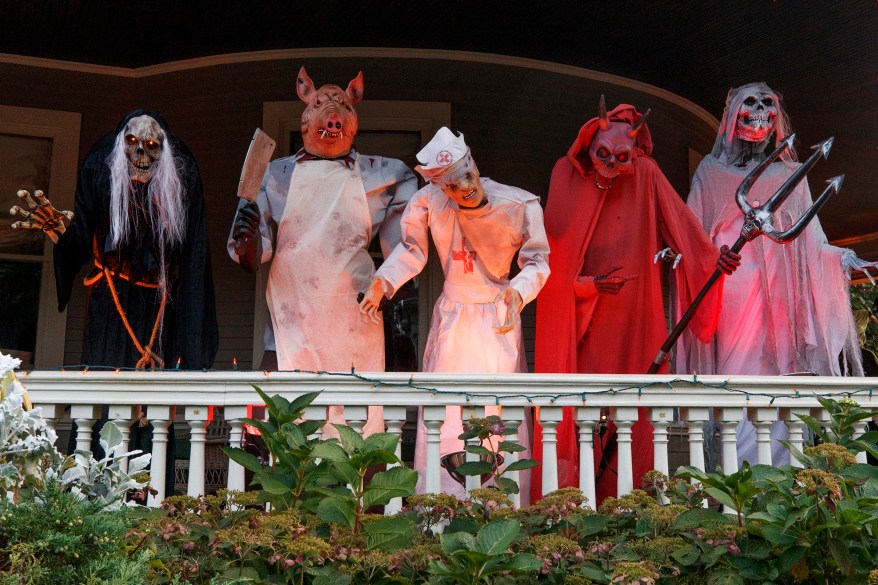 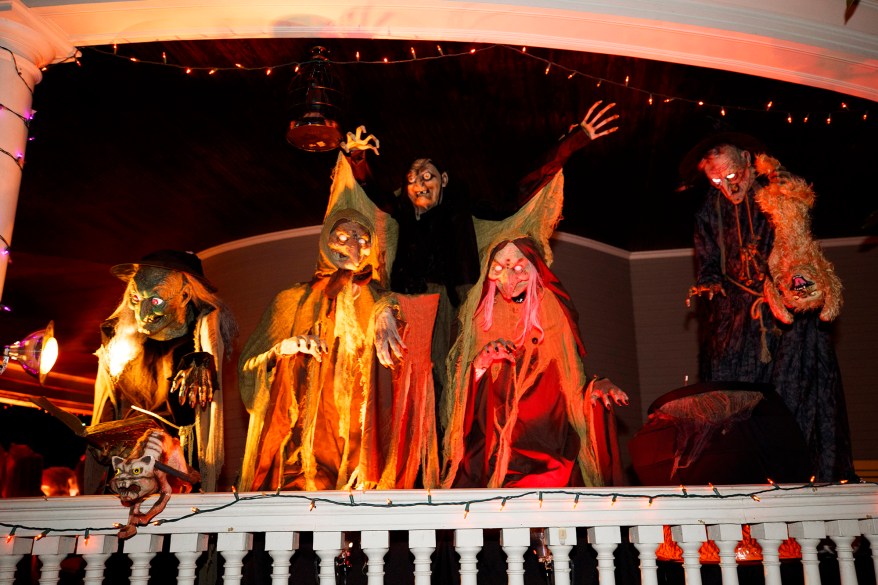 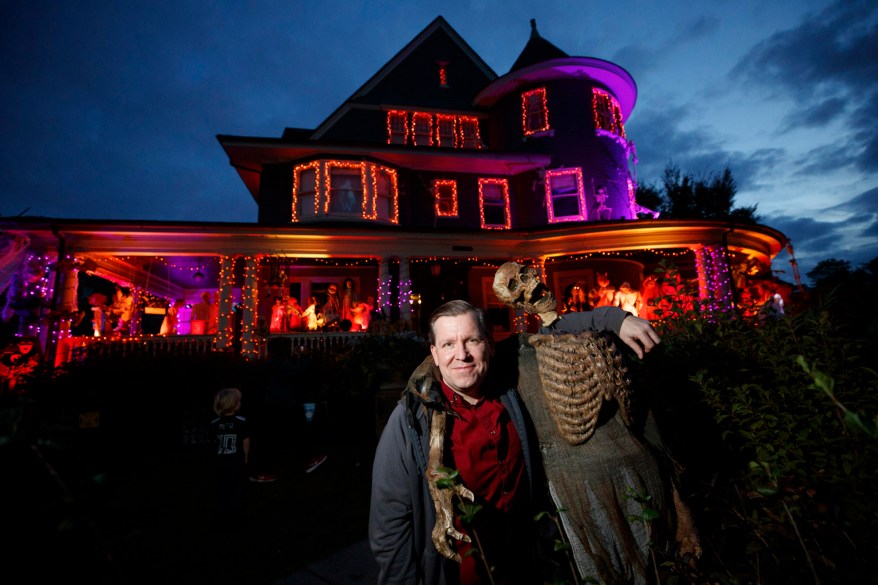 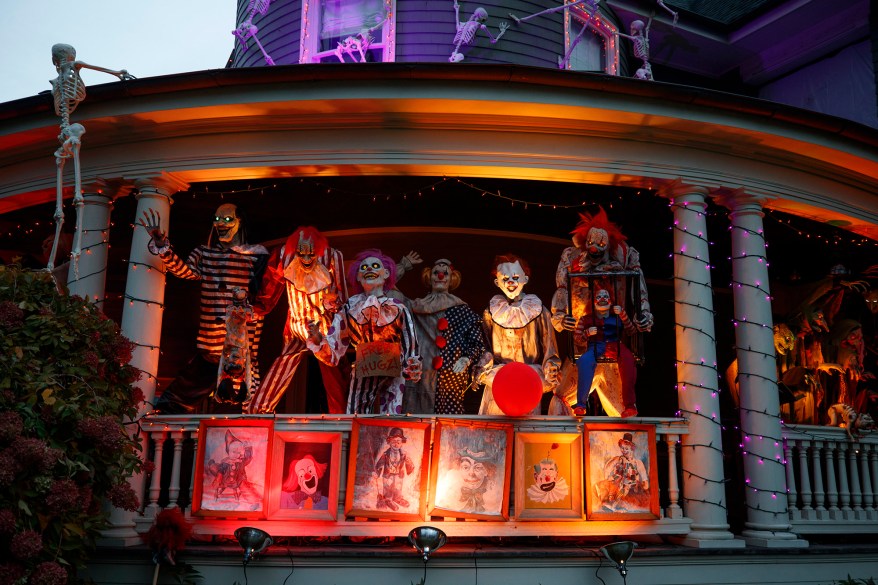 “I have a couple dozen skeletons scaling the house, several zombies, lots of witches, spiders, a werewolf and several scarecrows,” said David Lindsay-Abaire of the setup outside his Ditmas Park home. Of course, that’s in addition to the spooky window projections and 60 ghoulish motion-activated animated props.

The blood-curdling collection started seven years ago, when the Pulitzer Prize-winning playwright and his wife decided to participate in the small neighborhood Halloween parade. “Each year, I would add more, and now the entire house is decked out,” said Lindsay-Abaire.

Hundreds of people travel from all over to see the various vignettes that take over the wraparound porch, including a zombie swamp section, a coven of witches and a scary clown takeover topped off with retro paintings of the frightening funnymen.

“We have a friend who was a professional clown in the Barnum & Bailey circus who had been gifted clown paintings over the years,” said Lindsay-Abaire. “He didn’t want them in his own home … so I put them up every year.”

And while the playwright admitted his basement is getting quite full with the sinister specimens (which have startled the Con Ed guys on occasion), he’s still growing his collection.

“This year’s new acquisitions are a butcher with a cleaver and bloody apron, and there’s a possessed dog who pops out of a doghouse,” said Lindsay-Abaire. “This season’s hottest thing is the pigheaded butcher. I had to get it.” 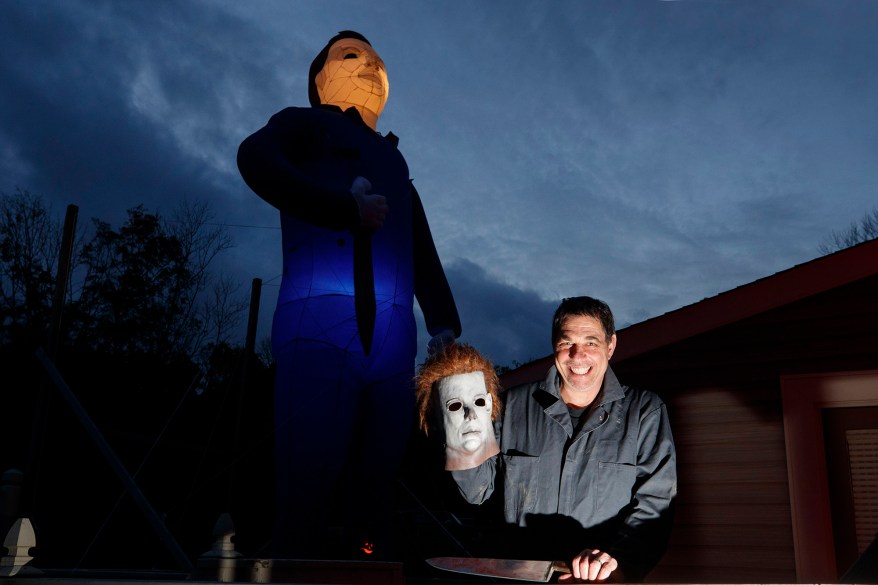 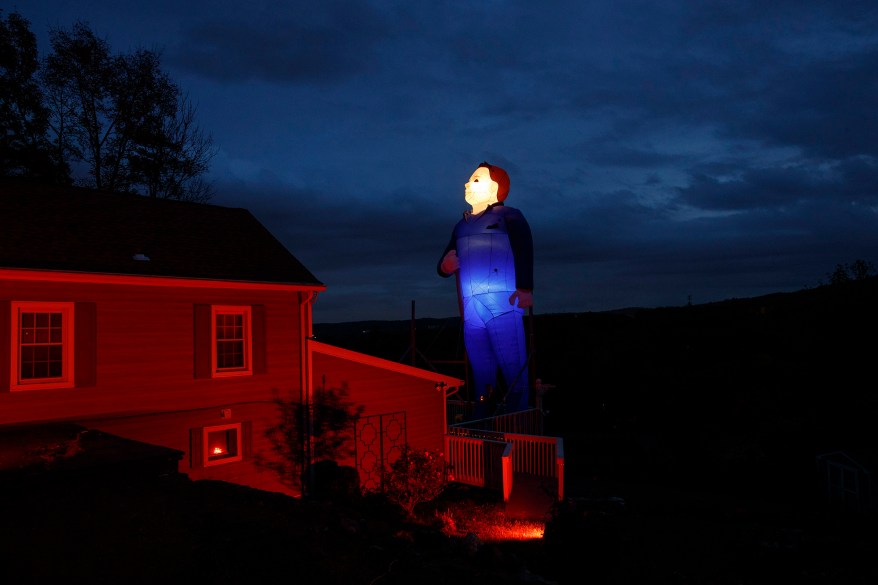 What started as standard Christmas decorations with blowup characters four years ago has grown into a literally over-the-top Halloween display. That’s because Kevin Malinski sets up a 35-foot inflatable Michael Myers that towers over his Bloomingdale, NJ, home.

“ ’Halloween’ is one of my favorite movies,” Malinski told The Post. “So, after I got the Christmas blowups going, I decided to get a Mike Myers one for Halloween.”

But, as popular as the 1970s masked murderer is, no inflatables of him existed. Malinski didn’t let that stop him. After reaching out to hundreds of production companies, he found a manufacturer in China willing to make him a custom design for $3,000. It took a month to plan, and the resulting piece is a three-story-tall horror icon that can be seen for miles.

“It takes about two hours to set him up, and two blowers and a separate circuit breaker to keep him up 24/7,” said Malinski. “My electricity bill for October goes up to $150.” 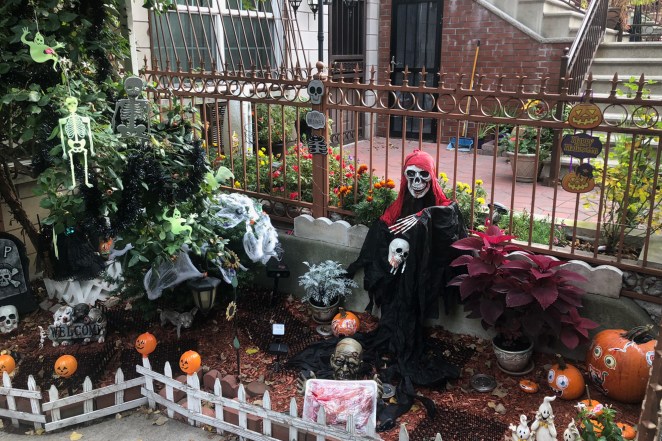 Jocess Franciosa knew Halloween wouldn’t be the same this year for her three grandsons. “There were so many fewer decorations up this year,” the Harlem resident said. “Normally, the townhouses in our neighborhood have incredible displays. But there was nothing this year.” So, the grandmother decided to take matters into her own hands for Wesley, 8, Wyatt, 6, and 11-month-old Wynnie.

“I went to several local stores and picked up zombies, skeletons, pumpkins, stickers and spider webs to surprise the kids,” says Franciosa. “Then we put everything up together.”

After a couple of hours, their house’s small front garden was covered in a gory scene complete with “guts” wrapped in plastic to look like they were packaged by a butcher. “The blood was all Wesley,” Franciosa said. “He told me when the rain washes it off, I have to put new blood on. Grandma’s job is to reapply the blood.”

And given the emptier-than-usual streets, the demonic display causes passers-by to stop in their tracks. “It’s fun to sit on my stoop and see people’s reactions and how they take photos,” said Franciosa. “I think I’m also going to put a big [traditionally themed display] for Christmas to help people get their mind off things, even for a moment.” 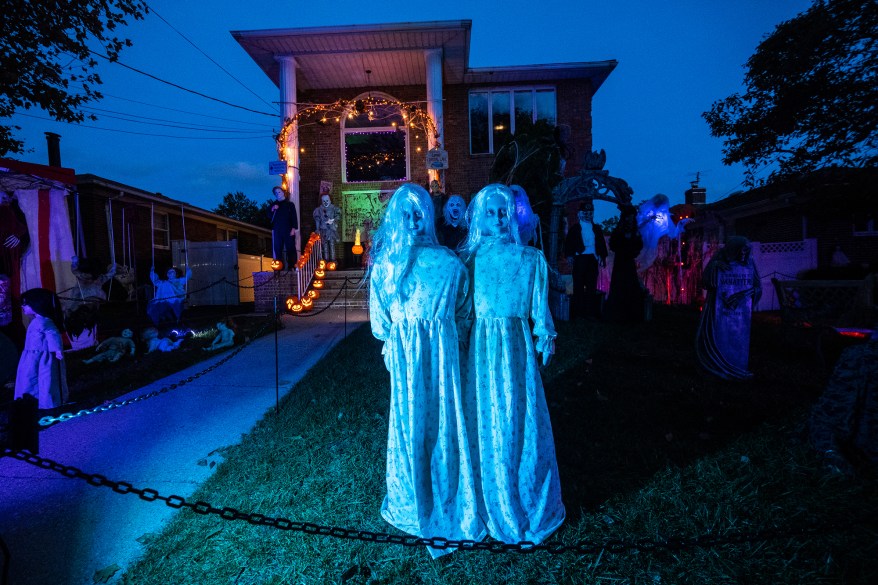 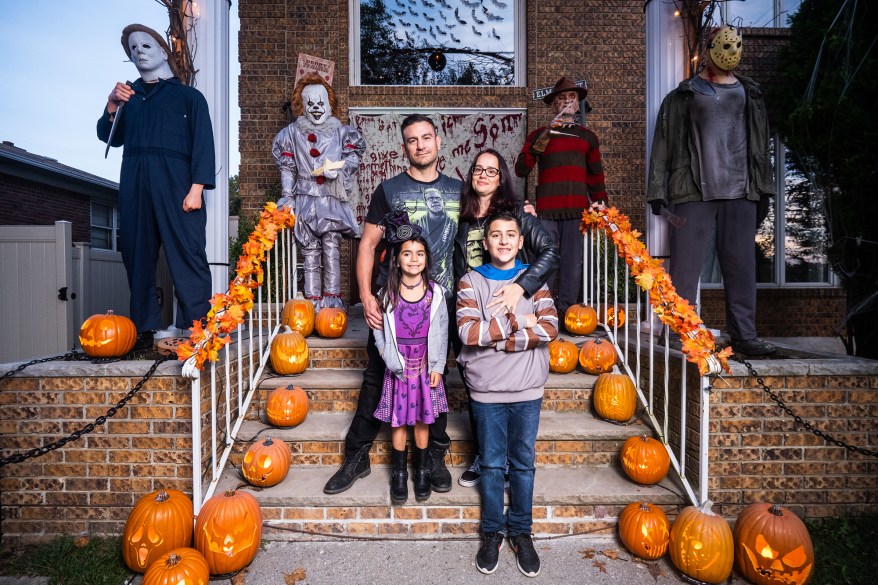 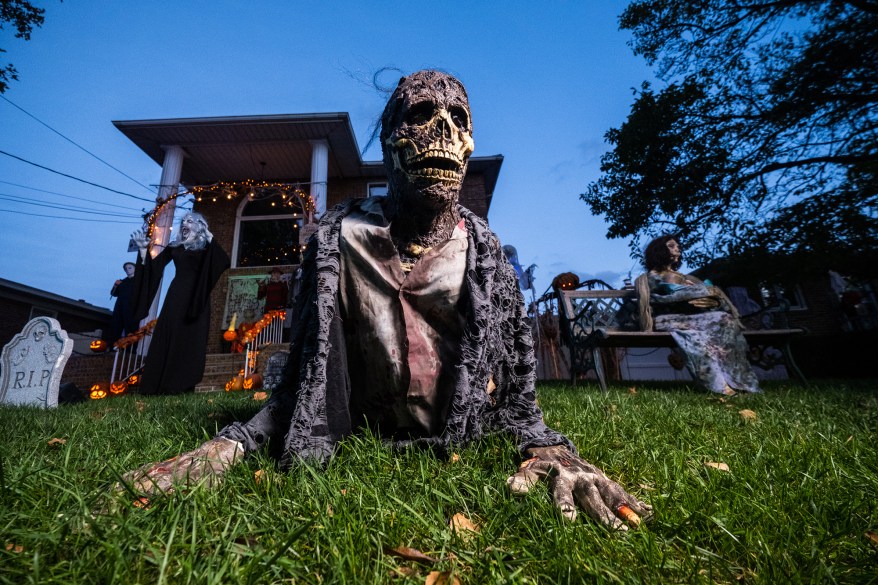 The Anguiano family has an elaborate Halloween display on their lawn and house on Staten Island. 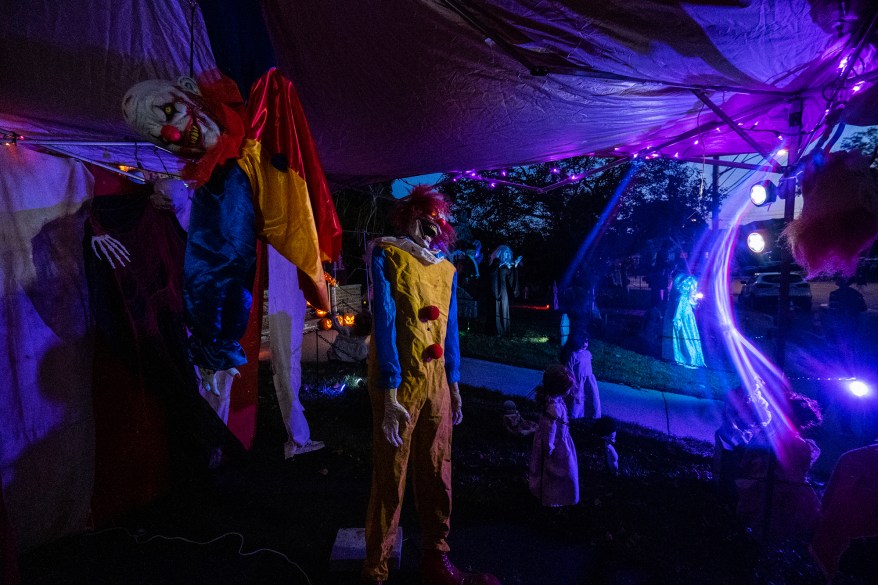 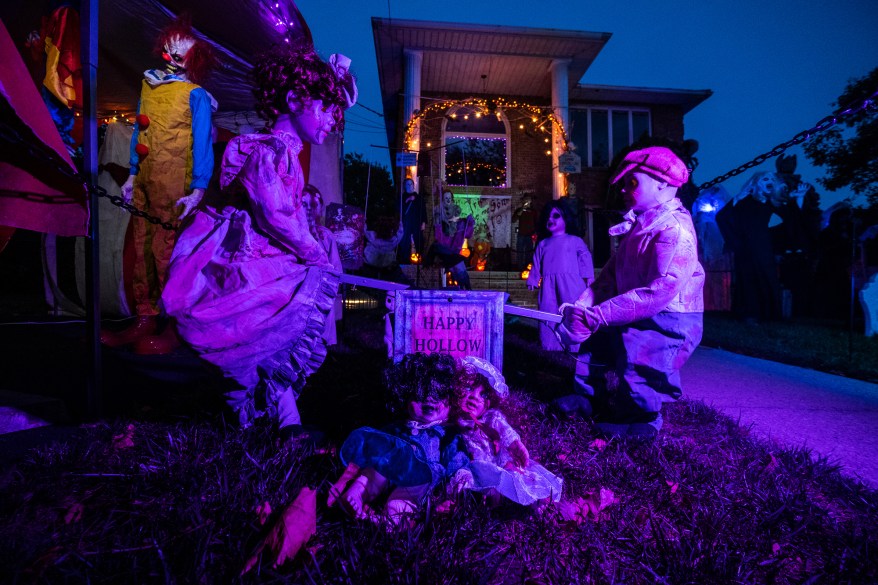 For years, retired NYC firefighter Eddie Anguiano transformed his Staten Island home into what neighbors called Monster Manor, with themes like “Nightmare on Elm Street,” “Friday the 13th” and even “Stranger Things.” Family and friends dressed in scary costumes and jumped out at visitors.

But after moving to a new home this year, Anguiano, along with his wife, son Marcos, 12, and daughter Ava, 6, wanted to make a scary splash at their new pad. So, the lawn is now outfitted with life-size Freddy Krueger, Michael Myers, Jason and Pennywise characters that Anguiano created using discarded Modell’s mannequins. There’s also a haunted doll scene, the Grim Reaper, illuminated ghosts and more than a dozen classic jack-o’-lanterns dotting their front stoop.

“I’m not sure why, but I tend to lean toward the scarier decorations and don’t really do cute,” said Anguiano, 43. “Which is strange because as a NYC firefighter I’ve dealt with fatalities and was never quite comfortable being around the bodies. I would always keep my distance.”

While the horror-movie fan admitted to spending “five figures” over the years on his decorations, Anguiano said he gets the most joy about the pieces he constructed himself. “I have a carpentry background and love putting these characters together,” he said. “It will take me three days for each one, but it’s worth it.”

Images show how girl, two, helped her twin to take her first steps

A little girl with Down’s syndrome had been struggling to find her feet Over the next few months, her sister Caitlyn…

His Lost A Loved One Unexpectedly! Single Dad and His Daughter “Re-enacting Romantic Photos the Same Scenes As His Wife”

Many people have said that we should cherish the present and live in the now, but it may be difficult…