It’s no secret that The Simpsons is one of the most well-loved TV shows of all time. Running for over three decades now, it’s also currently the longest-running animated sitcom in the history of American TV. Interestingly, aside from its unique humor, the show has also managed to build a reputation for somehow predicting the future.

From the emergence of smartwatches to Donald Trump’s presidency and more, it’s as though the show’s screenwriters can see what the future holds. And now, the show has made headlines once again, following the recent Biden-Harris inauguration.

The pair has assumed office after Trump’s term, making Kamala Harris the first-ever female vice president of the US. Although the show hasn’t featured Harris in any of its episodes yet, many believed that it already saw her victory coming. Fans with a sharp memory couldn’t help but associate Harris’ election to a scene from the “Bart To The Future” episode which aired in 2000.

Aside from its unique humor, The Simpsons has ultimately managed to make a name for itself for accurately predicting real-life events

The scene portrayed Lisa as the first female president of the US, succeeding Trump. To be fair, this isn’t far different from Harris’ milestone. But the uncanny similarity in their outfit choices was what struck people the most. Both Harris and Lisa wore a purple blazer and pearl necklace during their inauguration. This further convinced fans that the series had already foreseen her win way back then. 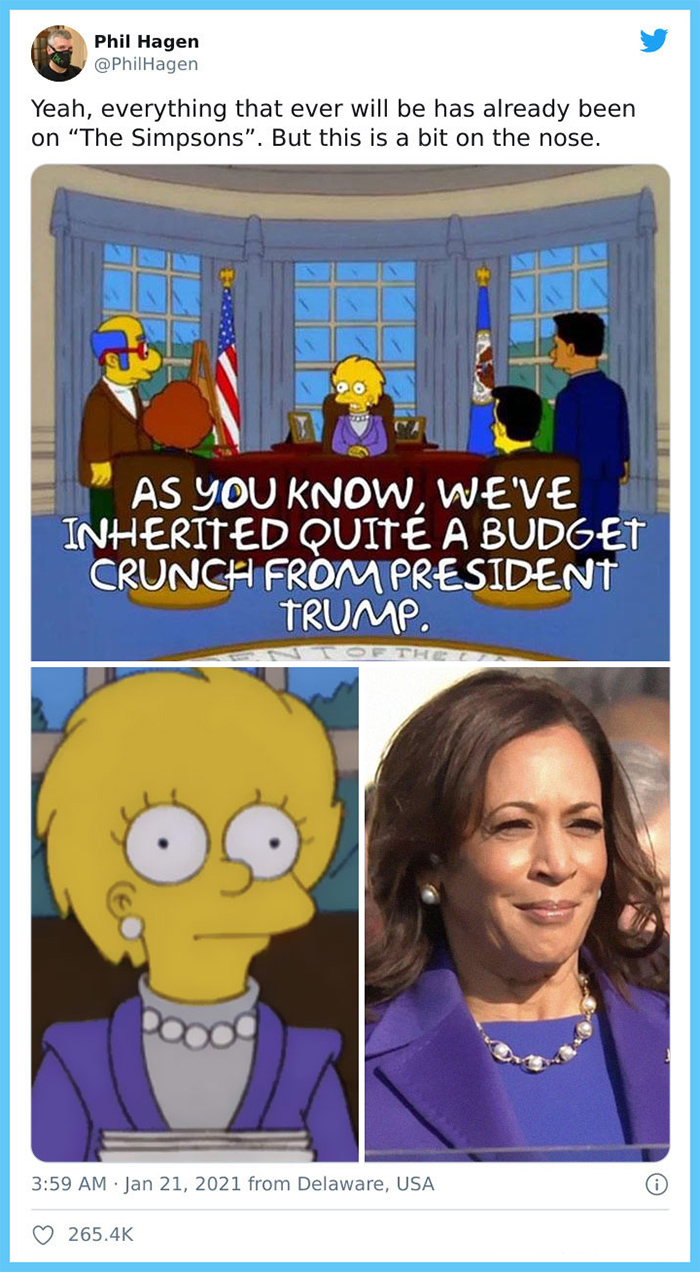 Aside from Harris’ outfit, Tom Hanks’ hosting stint during the inauguration also stirred up some discussion among the fans. This time, they linked it to the actor’s cameo role in the 2007 The Simpsons Movie. In the movie, the actor addressed the public during a time of “national chaos.” Over a decade later, Hanks also addressed the public as host of the inauguration night. 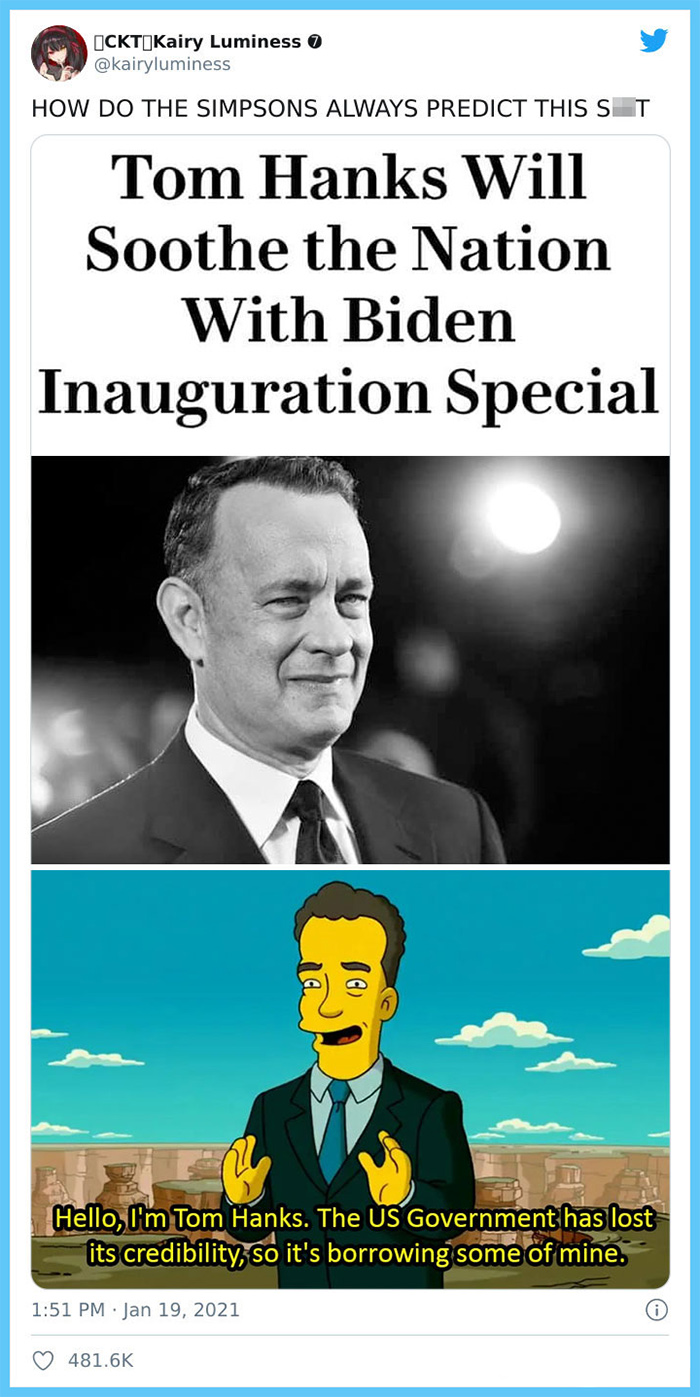 Without a doubt, Trump’s presidency was one of the series’ most spot-on predictions. In 2000, about 16 years before his announcement of candidacy, the show had already portrayed him as the president of the US. As to why Trump was the choice, writer Dan Greaney revealed that “it was a warning to America.” “And that just seemed like the logical last stop before hitting bottom. It was pitched because it was consistent with the vision of America going insane,” he added. 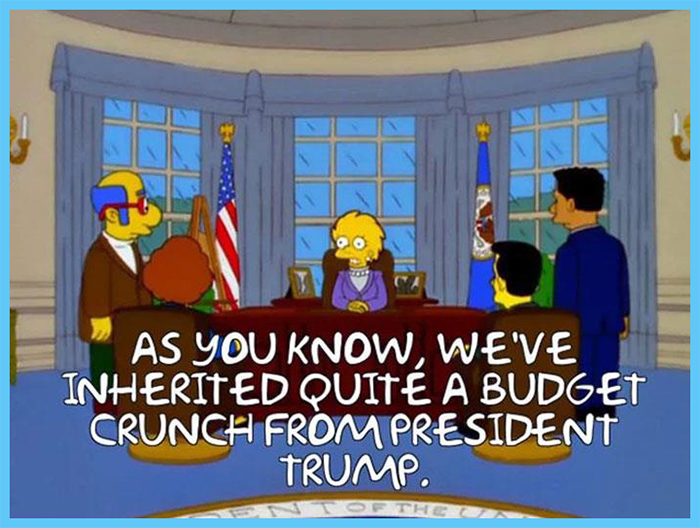 The series may not have predicted that Lady Gaga would sing the national anthem during the recent Biden-Harris inauguration. Nevertheless, it was able to foretell a major milestone for the singer’s career. In 2012, she performed in the town of Springfield while floating in the air using a harness. Five years later, she performed the same stunt in real life and even wore an almost identical space-age outfit for her Super Bowl set. 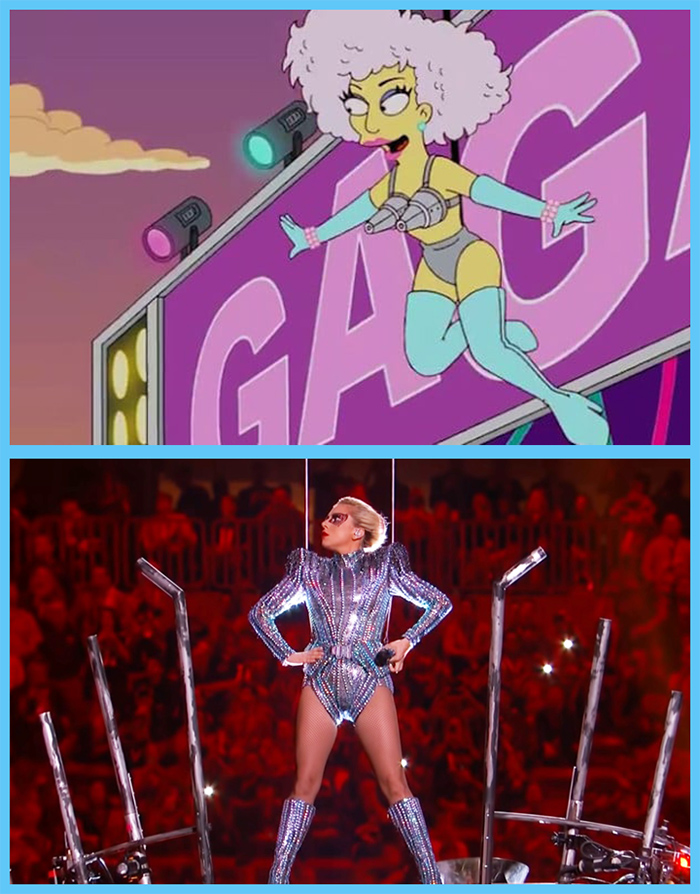 The plot twist in Game of Thrones Season 8 undeniably shocked many of its viewers. But what’s actually even more shocking was that it was already predicted in the animated sitcom’s episode titled “The Serfsons” which aired in 2017. 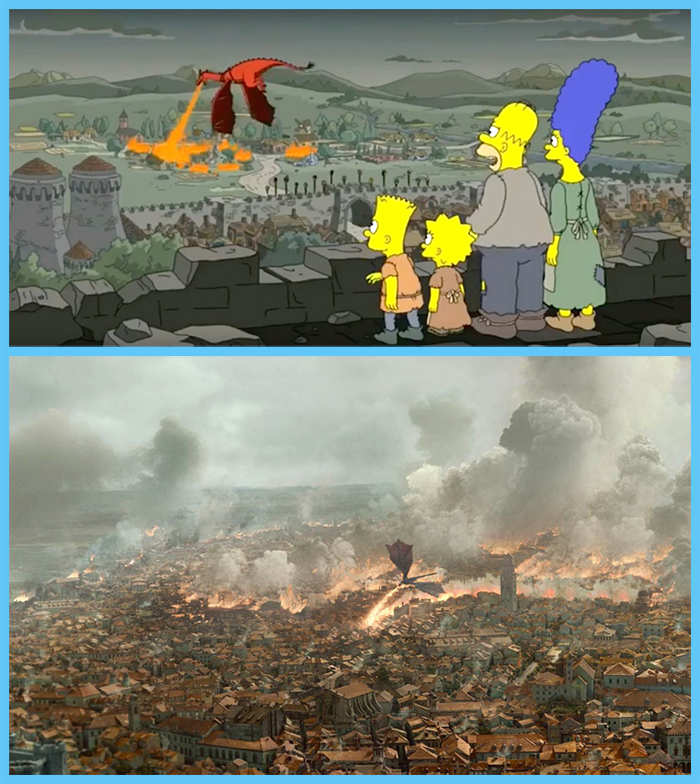 Several fans suggested that the sitcom predicted the 2014 Ebola back in 1997. It’s worth noting, though, that Ebola was first discovered in 1976. 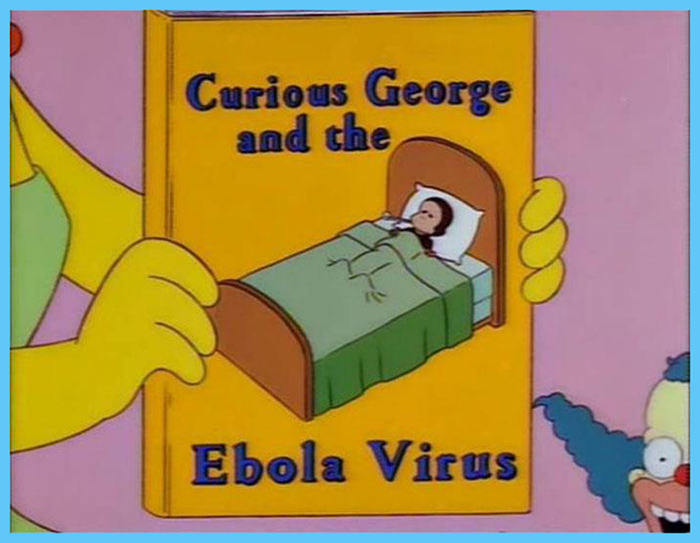 It can be recalled that a poster of a burning building with a “Coming Soon” sign was spotted in the 2001 episode “Chain Gang Johnny” of the animated series Johnny Bravo. This eventually led many conspiracy theorists into believing that the episode alluded to the 9/11 attacks. Indeed, this coincidence already seems freaky on its own.

However, the creators of the show might actually have been the first to have predicted this tragedy. In an episode aired in 1997, there was a scene where Lisa showed a magazine to Bart. The cover eerily featured a silhouette of the Twin Towers next to a big number 9. 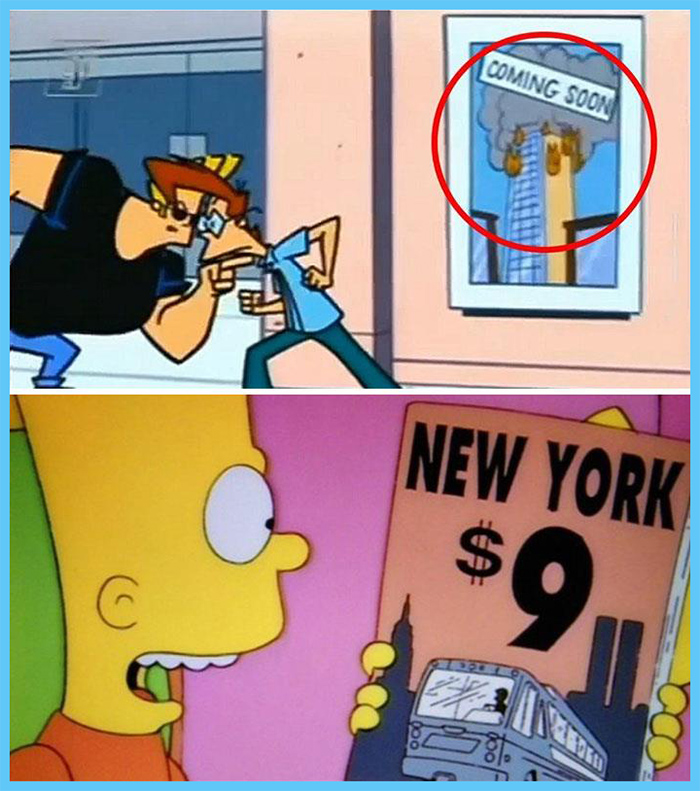 Apparently, iPod made its first “appearance” in an episode from 1996, five years before Apple introduced it to the public. The animated version of the device notably sported the same design and had the same functions as the actual iPod. 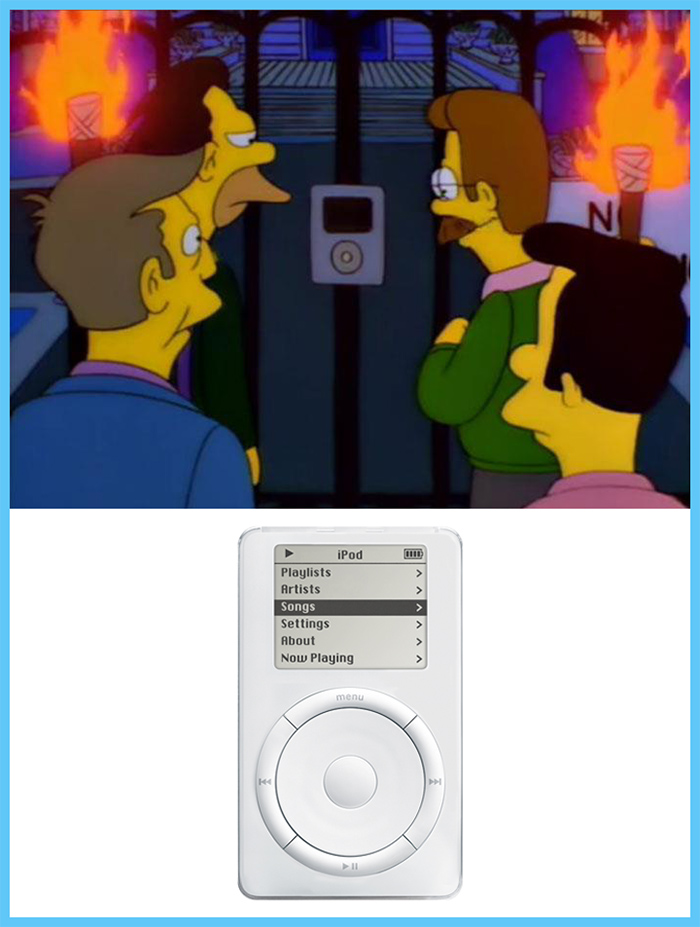 As early as 1994, the series already gave us a sneak peek of what we’ll refer to as “autocorrect fails” ten years later. A scene from the episode “Lisa on Ice” featured Dolph using an Apple Newton. At the time, it was infamous for its underwhelming handwriting recognition feature. So, when Dolph tried to write “Beat up Martin,” the device erroneously interpreted it as “Eat up Martha.” 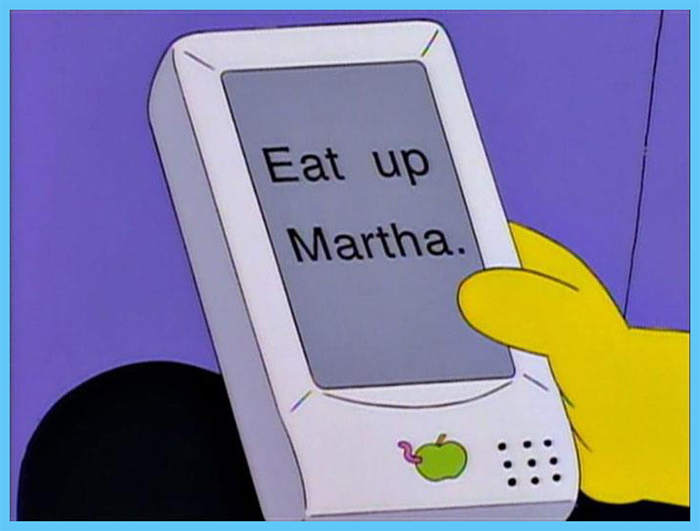 As it turns out, the show already introduced the concept of a watch that doubles as a phone as early as 1995. That’s almost 20 years before the launch of the Apple Watch! 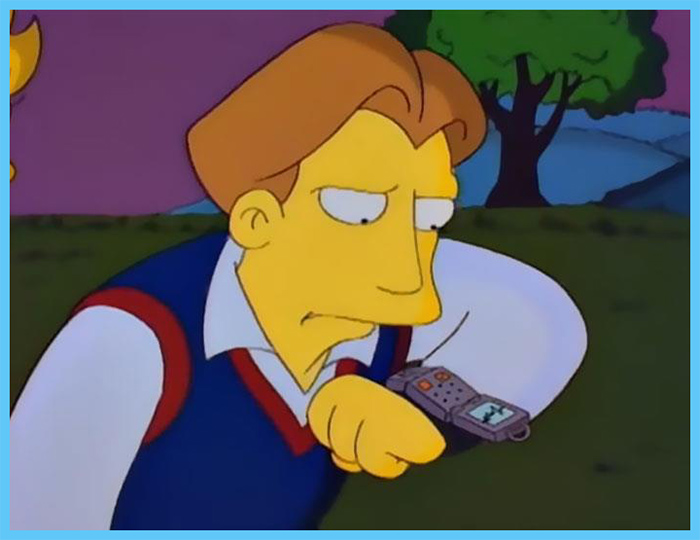 Homer appeared as a guest in a news show in the episode “Politically Inept with Homer Simpson” which aired in 2012. During his appearance, the news ticker displayed a headline that read, “Europe puts Greece on eBay.” Three years later Greece faced a major debt crisis. 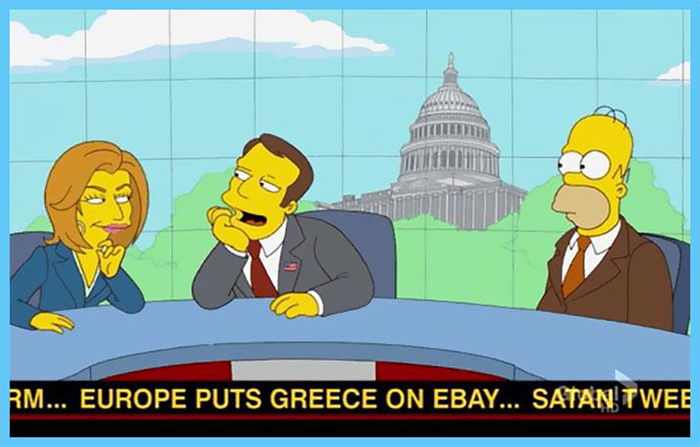 In 2013, the Food Safety Authority of Ireland conducted tests on a range of cheap frozen ready meals and burgers for the potential presence of DNA from undeclared species. Strangely enough, they determined the presence of horse DNA in over one-third of the beef burger samples. Naturally, the issue hit the headlines. Soon enough, fans associated it with a 1994 episode that featured Springfield Elementary School’s Lunchlady Doris bulking up the students’ meals with horsemeat. 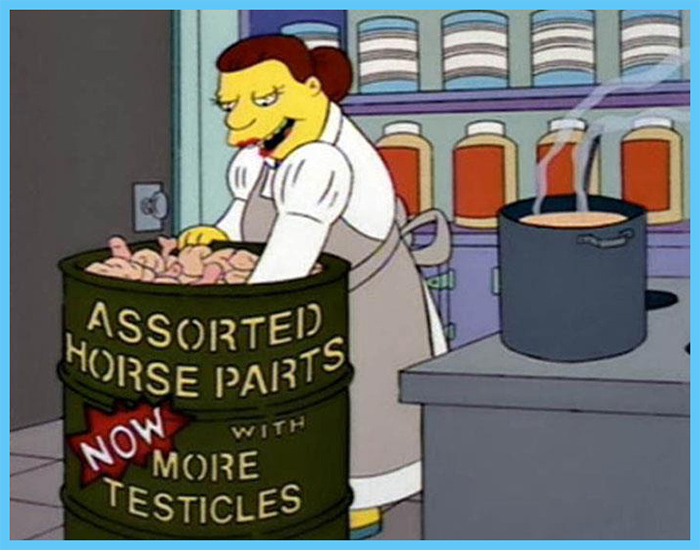 Construction of The Shard in London

The episode “Lisa’s Wedding” from 1995 predicted the iconic 72-story skyscraper even before its construction in 2009. Looking back, it’s simply amazing to see that the actual structure ended up looking like the one portrayed in the episode, including its location. 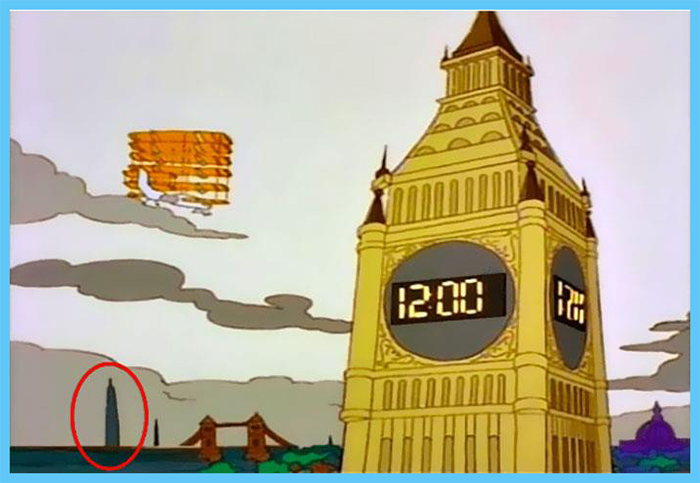 In the 1998 episode “When You Dish Upon a Star,” Homer pitched a script to Ron Howard and Brian Grazer of 20th Century Fox. Interestingly, the studio’s headquarters had a sign that read, “A Division of Walt Disney Co.” Fast forward to 2017, Disney acquired 20th Century Fox, including other assets of 21st Century Fox for $52.4 billion. 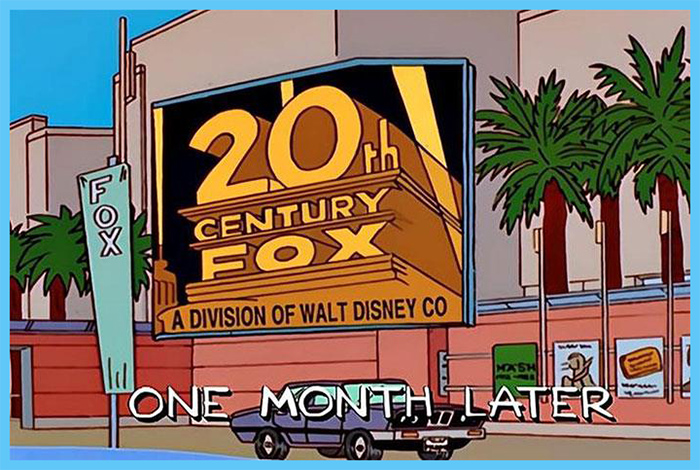 The discovery of the Higgs boson ultimately played an important role in explaining why other particles in the universe have mass. Professor Peter Higgs along with five other physicists first proposed its existence in 1964. However, it was only in 2013 when scientists finally confirmed its existence. Surprisingly, an episode that aired in 1998 managed to predict the equation to calculate the mass of a Higgs boson. 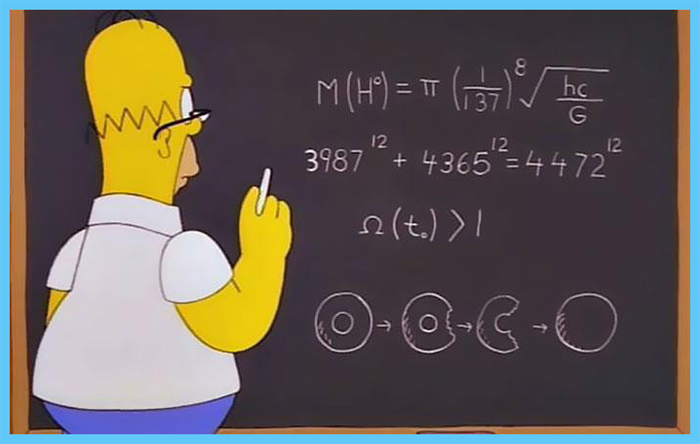 MIT professor Bengt Holmström bagged the Nobel Prize in economics in 2016. Apparently, he was also Milhouse’s bet as shown in the episode “Elementary School Musical” from 2010. 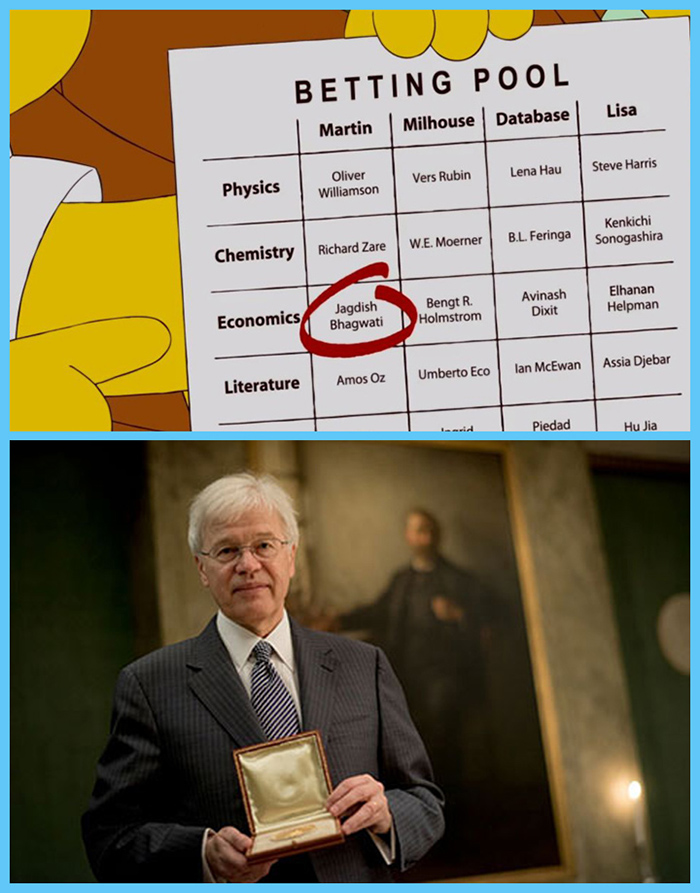 So, what do you think of these uncanny similarities? Are they simply pure coincidence or legit proof of The Simpsons’ screenwriters’ Nostradamus-like abilities? Let us know in the comments section below!