“Can you understand the delicate mindset of a person who has control over reality?” 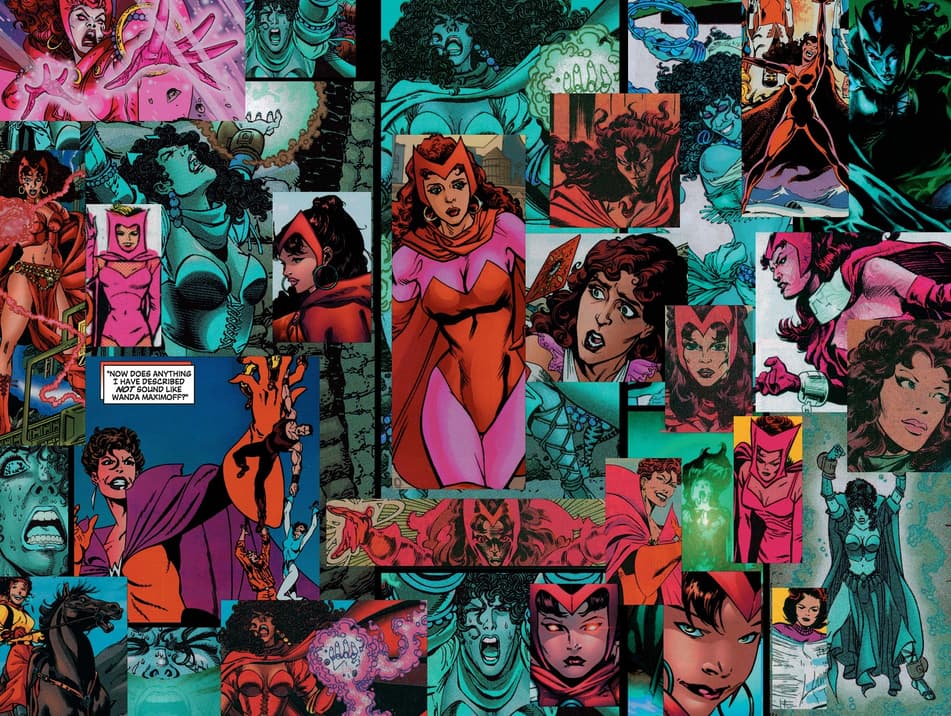 Doctor Strange asked this question in AVENGERS (1998) #503 and it’s as relevant now as it was then. The Scarlet Witch may be one of the most controversial Avengers of all time (and why shouldn’t she be?) but she is also a necessary counterbalance against magical and practical threats to Earth-616 and beyond. Her unique brand of mystical powers involve hex magic, telekinesis, and various psychic defenses that have allowed her to tweak, alter, or overwrite the fabric of reality itself. And while reality manipulation comes in handy when defending a Multiverse, it is also a thin, dangerous line between impulse and control. Especially when the wielder of said magic loses a piece of herself with each and every spell.

Whether using her magic to blast Super Villains or predict crimes as she did with Force Works’ hex mainframe, Wanda Maximoff has relied on her awe-inspiring power to achieve her goals—even when she may not have realized it. Here’s a look at some of the most astonishing, uncanny, and mysterious moments when the Scarlet Witch warped reality to her will. Read the comic stories now on Marvel Unlimited! 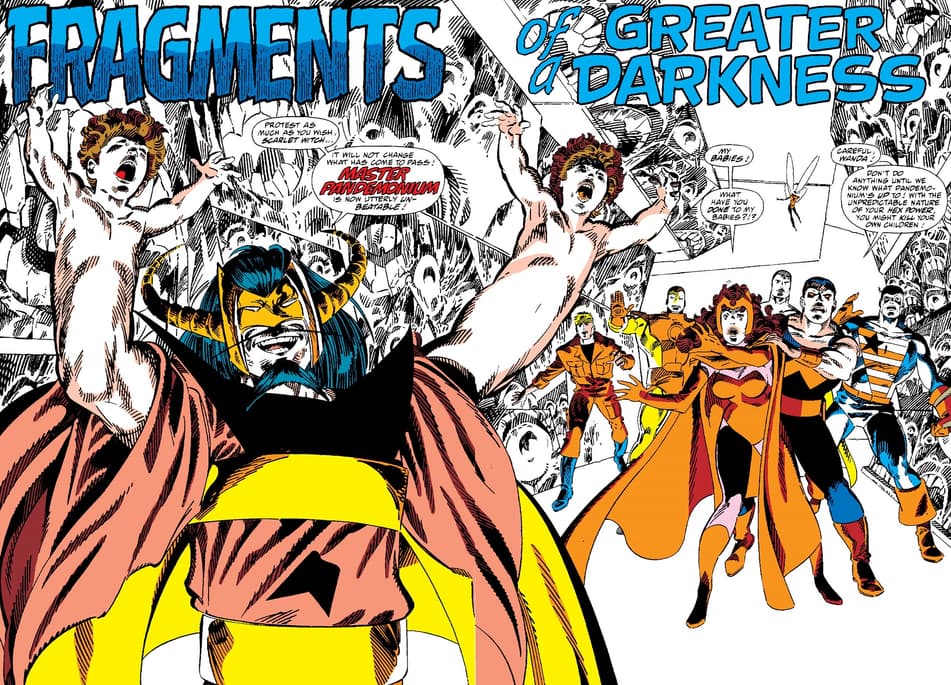 Marrying the synthezoid Vision was one thing, but Wanda’s Avengers friends could have asked a few more questions when she and “Vizh” had twin boys named Billy and Tommy in VISION AND THE SCARLET WITCH (1985) #12. Their new family soon joined up with the West Coast Avengers, but tragedy followed on their heels. First, the children began to mysteriously (and spontaneously) disappear only to show back up seemingly unfazed. Then, Vision’s entire personality was rewritten during the “Vision Quest” storyline. And, around that same time, Wanda was possessed by the dark Elder God Chthon.

But none of that held a candle to the reveal that took place in WEST COAST AVENGERS (1985) #52. The Scarlet Witch had unknowingly used her incredible powers to create twin boys from magic, using pieces of Hell-lord Mephisto’s soul in the process. This devilish fiend tricked former Hollywood producer Master Pandemonium into absorbing his soul fragments first. Then, Mephisto mystically bound the twins to Master Pandemonium’s forearms creating a perfect weapon to attack Wanda Maximoff and her teammates. To stop Mephisto—and to save her charge from mental anguish—Agatha Harkness erased all memories of the boys from Wanda’s mind, a decision that would reshape the world twice over.

After remembering the children and losing control, Wanda did experience some measure of closure when it was discovered that Young Avengers Billy “Wiccan” Kaplan and Tommy “Speed” Shepherd were her twins reincarnated. The broken family attempted to patch things up in AVENGERS: THE CHILDREN’S CRUSADE (2010), but there would be many more transgressions to come. 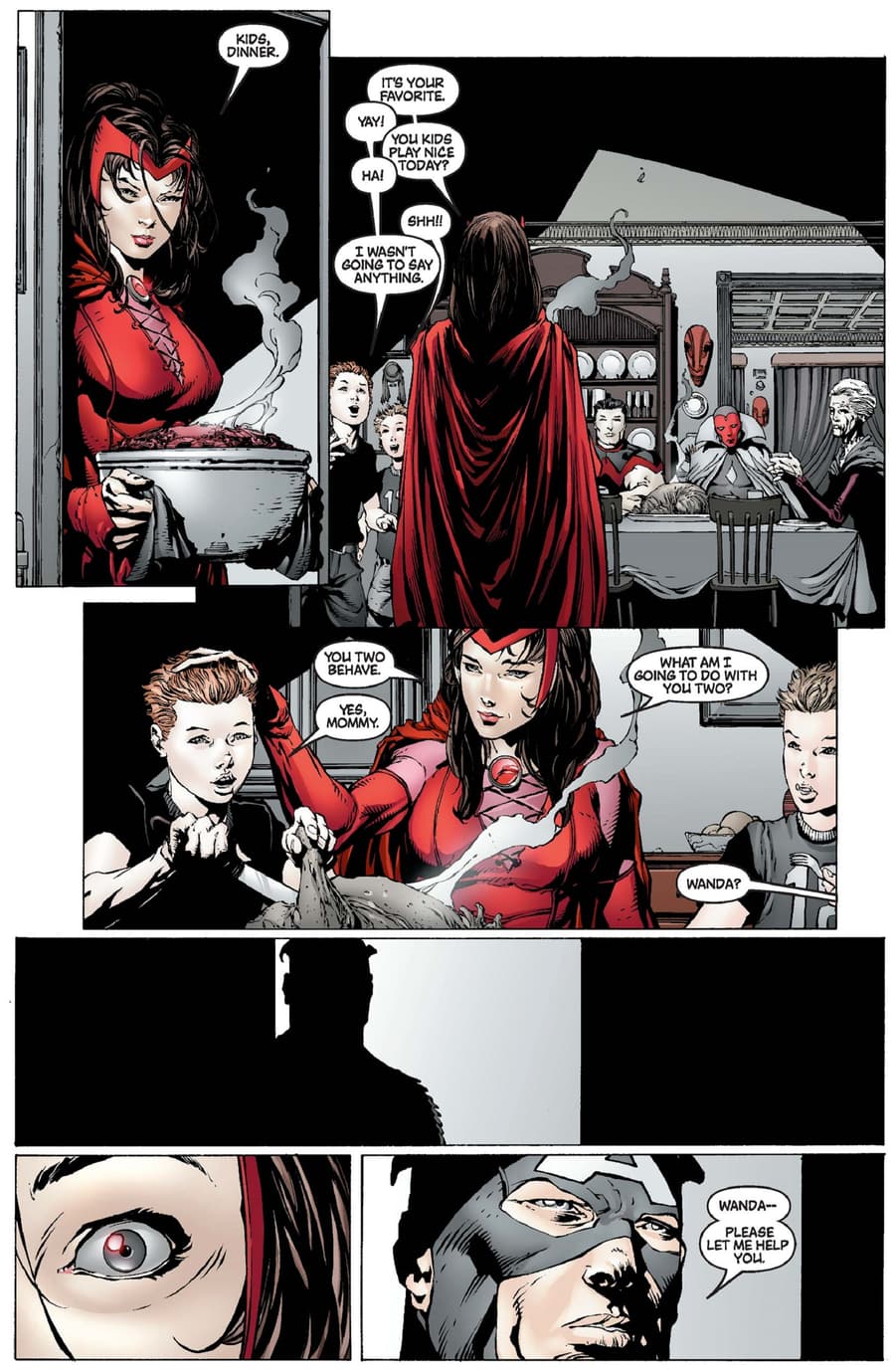 It’s better to work though trauma than to ignore it. And this next storyline is proof of it.

The Scarlet Witch had been forced to forget about her children, but Agatha Harkness’ spell did not hold forever. After an offhand comment from Janet Van Dyne by the Avengers Mansion pool, Wanda began to remember. The truth may set some free, but for the Scarlet Witch this void and betrayal proved too much. In the pages of AVENGERS (1998) #500-503, the longtime member disassembled her team with a series of brutal and, frankly, cruel attacks. She made Jack of Hearts explode right next to Ant-Man: Scott Lang killing them both. Meanwhile, recovering alcoholic Tony Stark felt under the influence while addressing the United Nations. Vision crashed a Quinjet into the Avengers compound to spew out an army of Ultrons which caused She-Hulk to go on a destructive rampage wherein she physically assaulted her own teammates. With the Avengers broken and battered, the Scarlet Witch continued on, unleashing a Kree invasion which directly lead to the death of Hawkeye, a colleague who had joined the team way back when she did.

And the whole time, the Avengers had no idea it was Wanda. That realization came when Doctor Strange appeared in astral form to explain her delicate mental condition and the toll of keeping such immense power in check. When the Avengers found her, she had recreated her loving family once more. During the final battle she manifested everyone’s most hated villain in a series of targeted attacks, and only stopped when the Master of the Mystic Arts forced her to see—and accept—the truth. 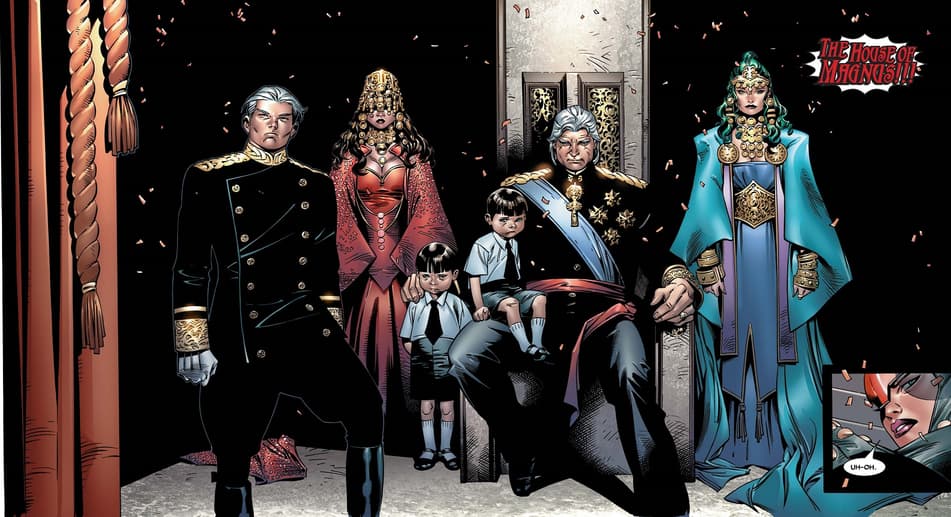 Following the “Avengers Disassembled” arc, Magneto took Wanda to the mutant nation of Genosha and attempted to help her mental state with assistance from Professor Charles Xavier. Both Charles’ psychic powers and Doctor Strange’s magical abilities failed to cure Wanda completely. During a meeting with the Avengers and the X-Men, those assembled argued about whether it was safer for the world to kill Scarlet Witch outright. Meanwhile, her brother Quicksilver convinced her to utilize Professor X’s powers in concert with her own to “make the world a better place,” one where they could all be a family again. Are you seeing a theme? And, by the time her teammates and friends all arrived on Genosha, Wanda made it happen.

The Scarlet Witch created an entirely new reality in the HOUSE OF M event, sprawling across many tie-ins and limited series. Now known as Earth-58163, the “House of M” reality featured mutants at the top of the societal food chain with Magneto as sovereign-in-charge. While most humans, or Homo sapiens, were marginalized, it did become clear that Wanda “gifted” her fellow heroes with what she deemed their most perfect lives. So, Carol Danvers as Captain Marvel was the world’s most beloved human hero, while Peter Parker married Gwen Stacy and was appreciated by the people he swore to protect.

Wanda’s mind-whammy didn’t work on everyone though. Both Wolverine and Layla Miller remembered the old world and worked together with the human resistance lead by Luke Cage to fight back. During the battle, the former world order was recovered and Scarlet Witch reverted reality back. But not before irreparably altering the landscape of the Marvel Universe with one simple phrase… 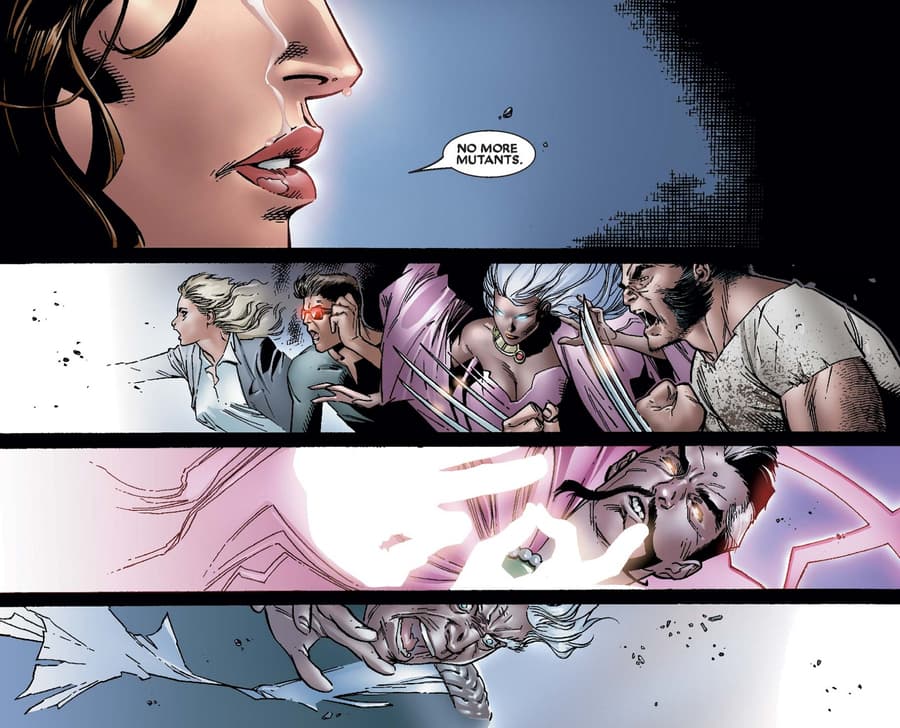 As the battle between realities raged on in HOUSE OF M (2005) #7, Wanda began to recall her life from before. Furious at Magneto for choosing his cause over his children, she spoke three little words before returning reality to its former state: “No more mutants.” Dubbed “The Decimation,” this spell rewrote the makeup of the entire planet, cutting the number of mutants from about a million down to just a few hundred. While some mutants appreciated this change, others found themselves struggling with a loss of identity. The Scarlet Witch’s reality alteration on “M-Day” didn’t just remove mutant genes from individuals—it also halted the birth of new mutants for quite some time. That is until Hope Summers entered the world.

The phenomena also made life for mutants all the more dangerous as hate groups saw an easier road to wiping them out completely. Recognizing themselves as an even more endangered species, the X-Men banded together with many mutants—even ones previously seen as enemies—to build a better world on an island off the coast of San Francisco called “Utopia.”

This reduction of the mutant population has played into just about every major X-Men event since and is still being dealt with today. Though some mutants found their powers returned under various circumstances, others are being resurrected by The Five on the mutant nation of Krakoa with their abilities and memories intact. 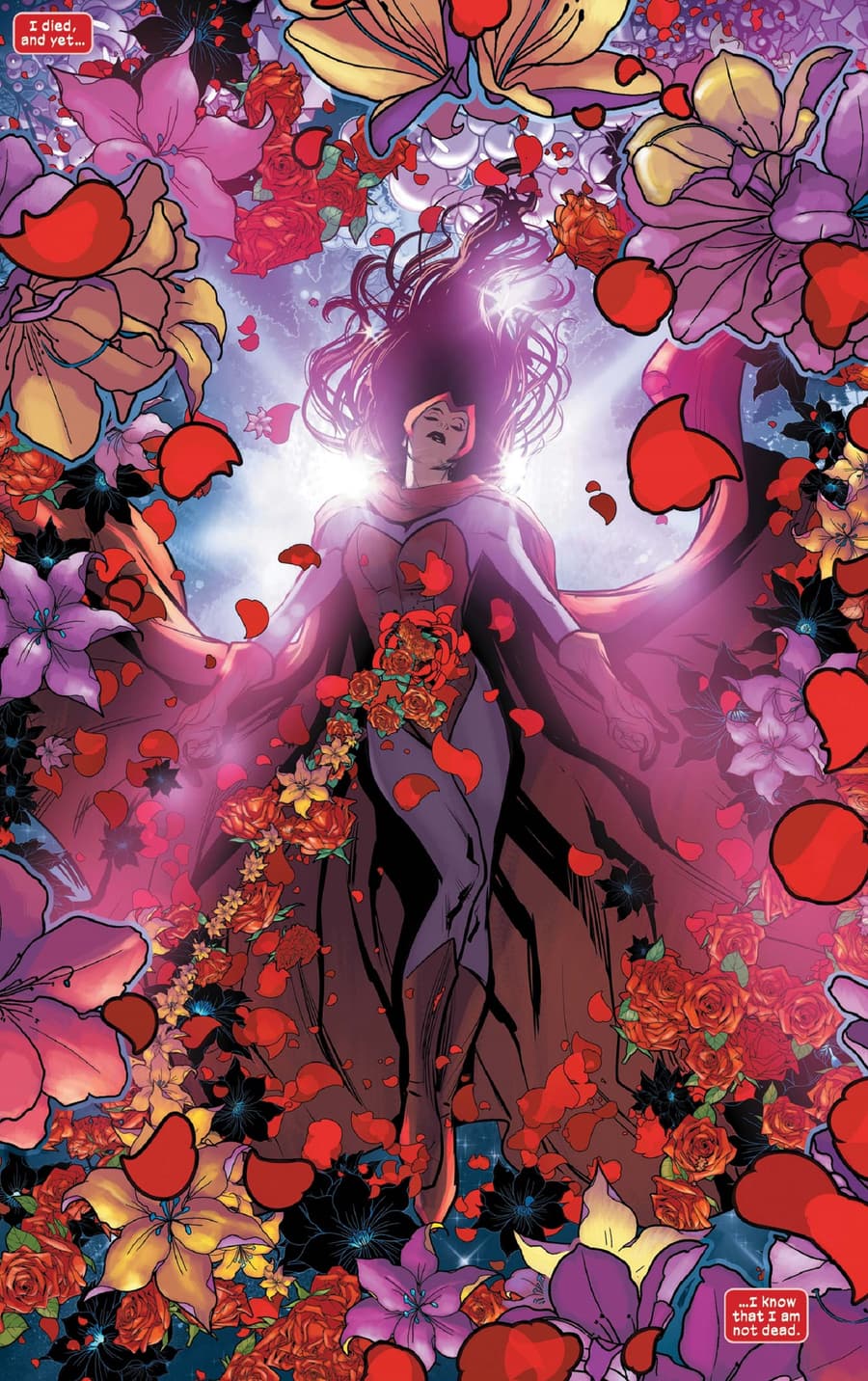 Even though Wanda Maximoff returned to the Avengers and even managed to save Scott Lang’s life, redemption remained out of reach especially when it came to the denizens of Krakoa. Her status in the mutant community was further tarnished upon the revelation that she was neither a mutant nor Magneto’s true daughter. Still thinking of Wanda as his child though, Magneto invited her to attend the first-ever Hellfire Gala as a token of peace. Racked with guilt over her past actions, she did not attend, but secretly visited Magneto as seen in S.W.O.R.D. (2020) #6. Between that issue and X-FACTOR (2020) #10, she presented a plan that would pave the way towards healing her relationship with the mutants… until she was discovered dead on the grounds of the gala!

The investigation into her murder was covered in X-MEN: THE TRIAL OF MAGNETO (2021) where all evidence pointed toward Magneto’s involvement. Though the rulers of the island voted to not resurrect Wanda, The Five planned on doing so anyway. But while discussing the matter, the Scarlet Witch took matters into her own hands by bringing herself back to life!

Though her memories were incomplete, Wanda’s powers remained. She inadvertently created a pocket dimension to deal with her past, present, and future selves, but also unintentionally brought forth a trio of huge monsters that attacked the island. Upon regaining composure, she helped stop the monsters and also made a huge step towards making amends with the mutants by setting up a magical system that allows Cerebro to create copies of any mutant who has ever lived with back-ups stored in a pocket dimension. All part of her plan from the beginning. And with that, Wanda altered reality in an effort to heal not only her own past trauma, but that which she inflicted on others.