Here is the story of this unique friendship that has developed between three German Shepherds Blacky, Hugo, and Jenny, and two endangered Siberian Tigers Suria and Sunny. The place is a wildlife sanctuary called Oasis in Slovakia. This sanctuary protects the Siberian Tigers and breeds them.

This sanctuary was founded in 1999 by Yveta Irsova and since then 23 tigers were born there. At present, it is home to 28 tigers. The Siberian tiger Suria is in the Sanctuary since her birth. The German Shepherds were also born around the same time and they knew each other since the time they were babies. 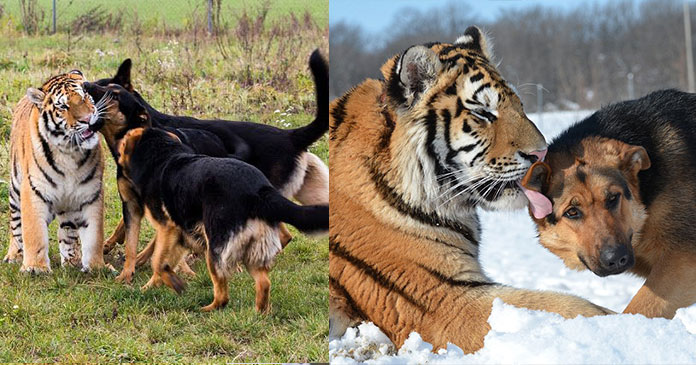 So it was the start of a new friendship between three dogs and Suria and her cub, Sunny. They spend time playing together as they engage in play-fight and chase each other excitedly. But they never cause any harm to each other.

They behave like siblings and they never hurt each other. According to Lucia Zustakova, one of the volunteers at the sanctuary said that it was nice to see all and it was so amazing when they see those beautiful animals. Suria played with the dogs every day and they just love her.

Oasis is a great project to help those tigers that are facing extinction. This friendship is quite special and these types of animals actually never cease to amaze us. They break the stereotypes and tell us that friendship can be formed in the most interesting way.