Frida inspires families with special needs pets to never give up hope. 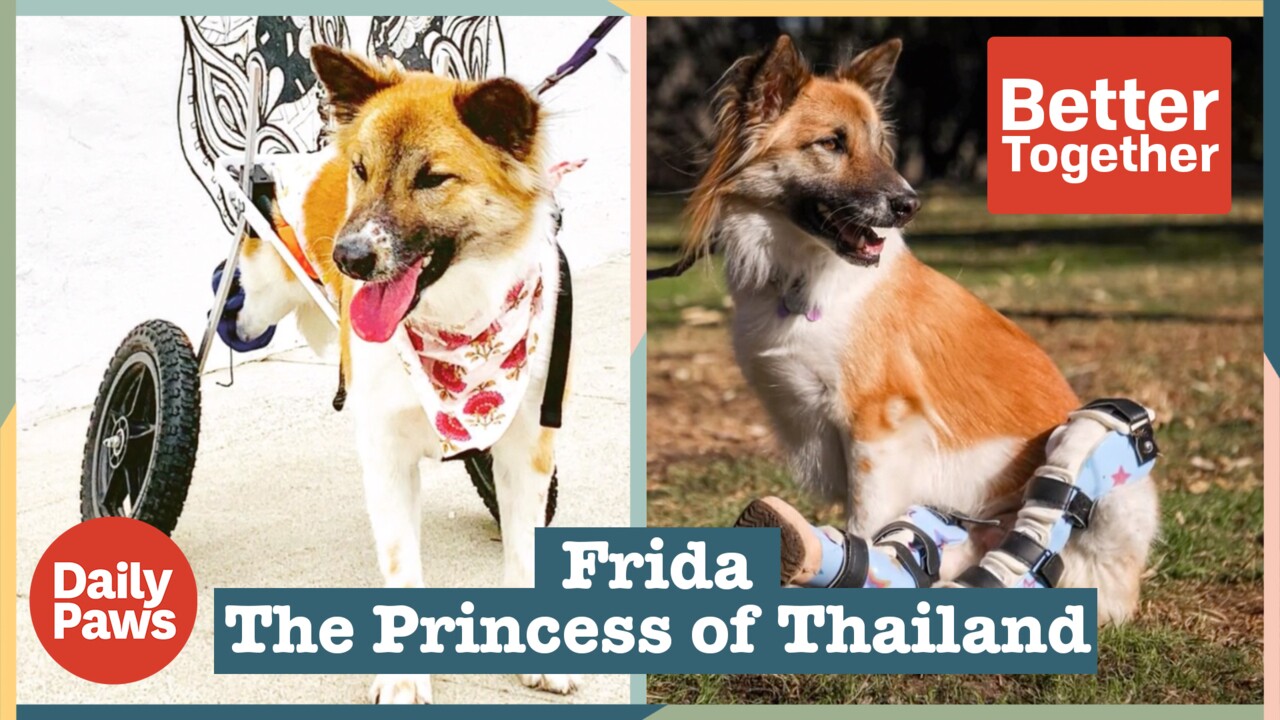 When Lisa Chong visited Thailand in 2018, she didn’t think she’d be coming home from vacation with a dog. Now, she’s the proud pet parent of a disabled pup named Frida, known on social media as @frida_strong and the co-founder of The Frida Project, a nonprofit supporting paralyzed pets.

It all started in December 2018 when Chong and her childhood best friend Tara Austin were in Thailand. After dinner one night, they saw an injured pup dragging herself across a busy road. The two knew the abandoned dog needed help, so they took her to a nearby vet.

Initially, Chong and Austin didn’t realize how bad Frida’s injuries were. But as the vet cleaned her up, they found she had a broken and dislocated back, which damaged the nerves to her bladder and bowels. The injury had also left her back legs paralyzed.

“She was just in this dismal, dismal place and needed help so desperately,” Chong tells Daily Paws.

After caring for Frida during her time in Thailand, Chong decided the best way to ensure the disabled pup continued to heal was to bring her home to the United States. The main reason, Chong tells Daily Paws, was the opportunity for Frida to receive more physical therapy and treatment in America. But even in those early days, Chong says she wanted to see Friday walk again. She already viewed Frida as a member of her family, so saying goodbye was not an option.

Frida flew back to America with Chong where the two worked through on strengthening the pup’s back legs through physical therapy, which ranged from swimming and underwater treadmills to at-home exercises. While the physical therapy helped improve her mobility, it wasn’t enough to get Frida walking on her own. Then, through social media, Chong found Derrick Campana, a pet prosthetist who has treated over 3,000 animals through custom pet prosthetics.

“We thought, ‘Well, let’s try him as a last resort.’ And he nailed it,” Chong says. “She took her first steps immediately.”

During Frida’s recovery, Chong and Austin started The Frida Project, a nonprofit organization that provides support for paralyzed animals and educates others about stray dog rescues like Frida’s.

“It certainly is a huge learning curve when caring for an animal like this, but the rewards are phenomenal,” Chong says.

If it wasn’t for Frida, Chong says, her life would have gone in a completely different direction. With Frida as a member of her family, she was inspired to spend more time working to help other disabled animals. But Frida’s message doesn’t stop at animals—her perseverance despite the odds resonates with humans, too.

“Her story radiates to children with prosthetics, to people that are maybe differently abled, she says. “I really feel that her life was a calling. And we want to share that purpose and message with the world.”

Chong says after her recovery, Frida is no longer in pain and now lives a fulfilling life. And without pain, Frida’s personality now shines through as the funny, trusting and loving pup she is.

“She’s a girl with a fighter spirit.”