Sometimes animals have to face the predators in a very dramatic way. Maybe that’s the law of nature that the strongest will survive. There was actually a clash of titans when a protective elephant mother and a ferocious crocodile get in an epic tug of war in Zambia.

The mother elephant and her baby were drinking water from the Luangwa River in the South Luangwa National Park. As they were drinking, they were attacked by a crocodile. 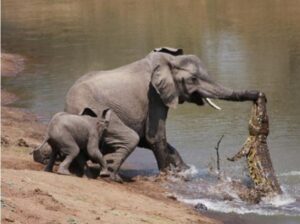 The attack was sudden that the elephant was brought to her knees as the crocodile thrashed around. The elephant did not give up and even being on the hind legs, the elephant gave the fight and it tried to move away from the water. But the crocodile was clamped down on her trunk. 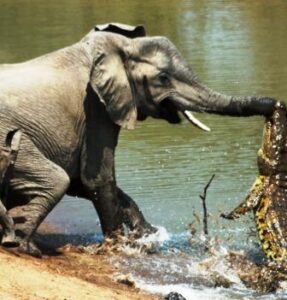 As the baby was away on the safer side, the mother stepped away from the water with the crocodile still clamped on. The mighty elephant pulled the crocodile all the way out of the water as she walked away.

Thankfully the mother survived the attack along with her baby. Though there was a second threat when the baby tripped as the pair ran away.

This park in Zambia covers around 9000 square kilometers and it has 60 animal species including baboons, buffalo, zebra, giraffe, leopards, lions, and hippopotamus. This park is known for its mighty elephant herds which are up to 70 individuals.