A rhino and zebra have struck up an unlikely friendship after being rescued as orphans in the wild.

Adorable pictures show the ‘live-saving’ friendship of seven-month-old rhino Daisy and zebra Modjadji who were both rescued by an orphan animal sanctuary in South Africa.

Daisy and Modjadji, whose name means ‘rain queen’, were both nurtured back to health at Care For Wild animal sanctuary in the Barberton Nature Reserve near South Africa’s border with Eswatini.

The sanctuary has shared regular picture and video updates of the pair’s recovery and budding friendship on their Instagram page.

The inseparable friends were often photographed cuddling up with each other during their long period in ICU, while videos show them sharing walks and dinner-time together.

Modjadji’s love and cuddles have been described as ‘life-saving’ for little Daisy, who arrived at the sanctuary in a very bad way.

An appreciation post for Modjaji in January read: ‘This little orphan zebra has been a life saver, always there for her rhino friend.

‘Modjadji is still a baby herself. Just over eight weeks old, she is also drinking milk every three hours around the clock.

‘Found alone and barely alive after heavy rains and storms, Modjadji was brought to ICU.

‘Extremely compromised and with a severe anaemia, she received a blood transfusion from another zebra which saved her life.

‘Now a lot stronger, Modjadji watches over our littlest rhino orphan and we love her so much!’ 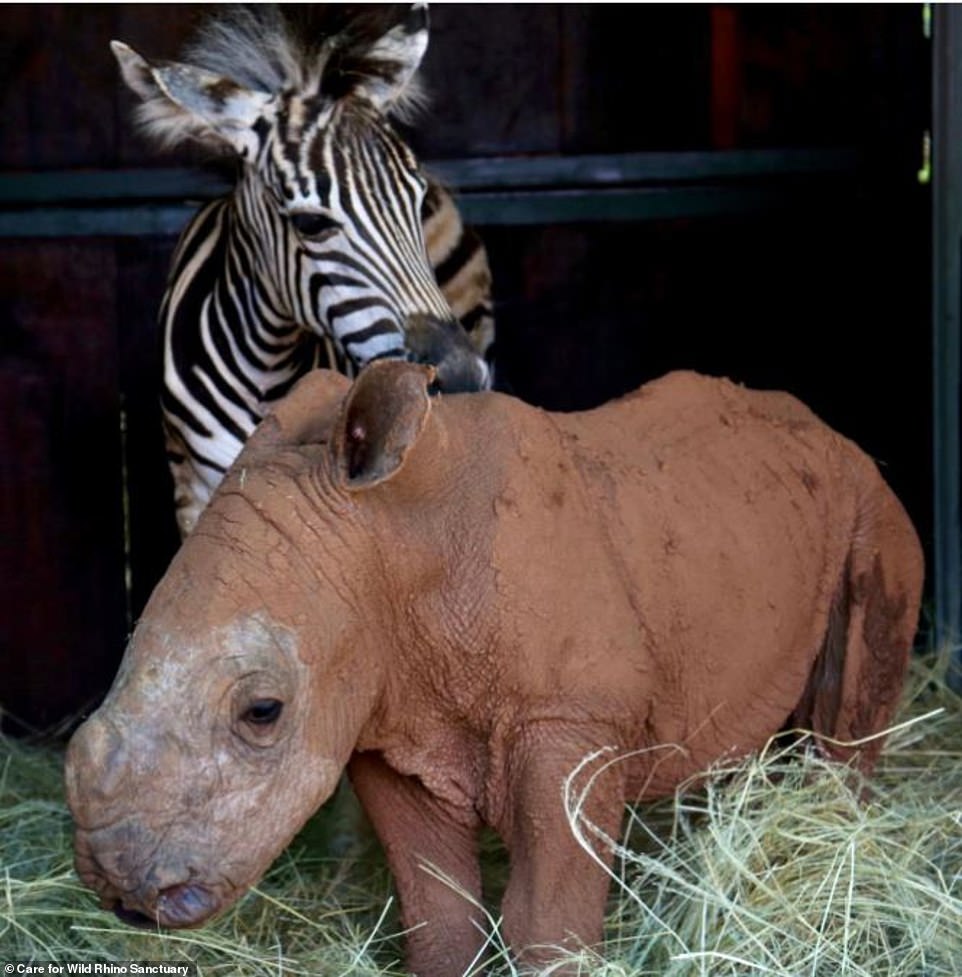 The pair have been ‘inseparable’ since they were introduced to each other last December, going on walks, drinking their milk together and snuggling up at bed time 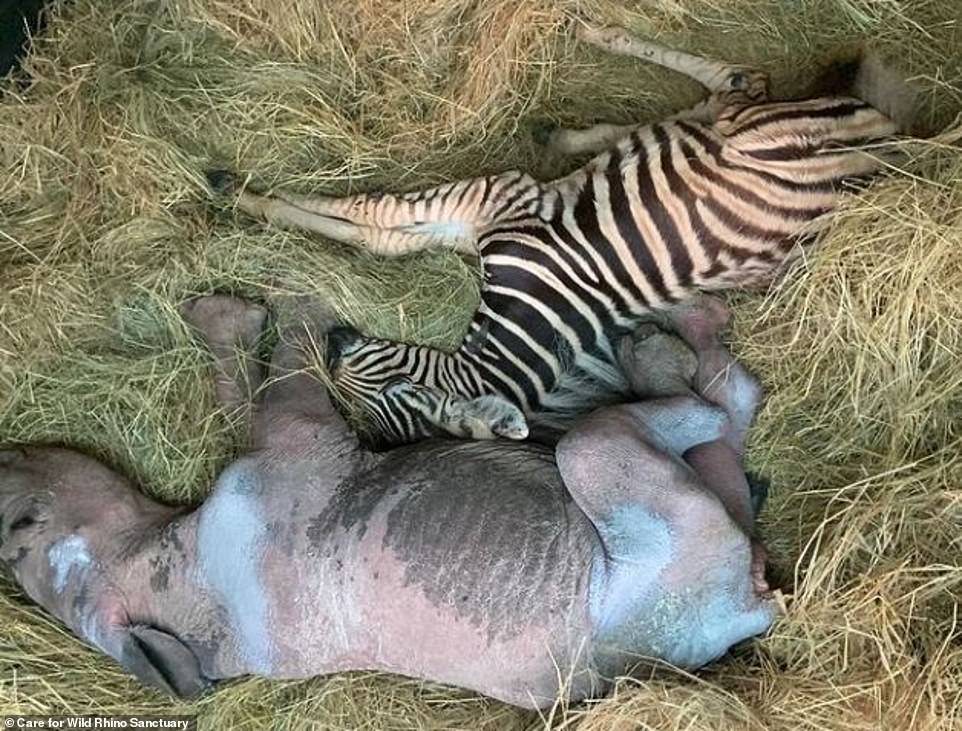 Daisy and Modjadji (pictured in January) will eventually be reunited with their own species but ‘their unique friendship will always be a vital part of their rehabilitation journey’, the sanctuary said. 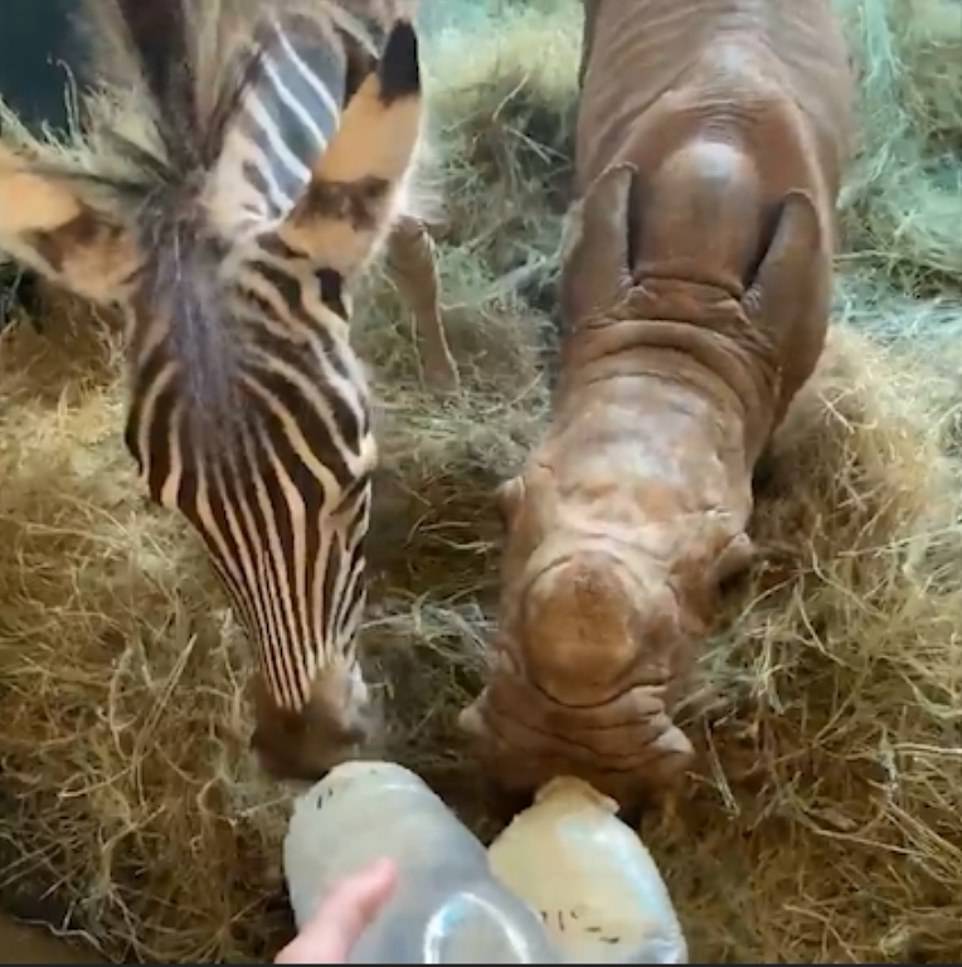 Found less than a month after her companion Modjadji, Daisy was rescued during a routine operation in the Kruger National Park in early December.

Just 12 hours old, she was still wet from the womb and her umbilical cord was still attached.

Daisy was unable to stand, had a ‘nasty umbilical infection’ and was extremely weak and vulnerable.

The baby rhino received a plasma transfusion to boost her immune system and was getting round-the-clock care in the Intensive Care Unit for several months. 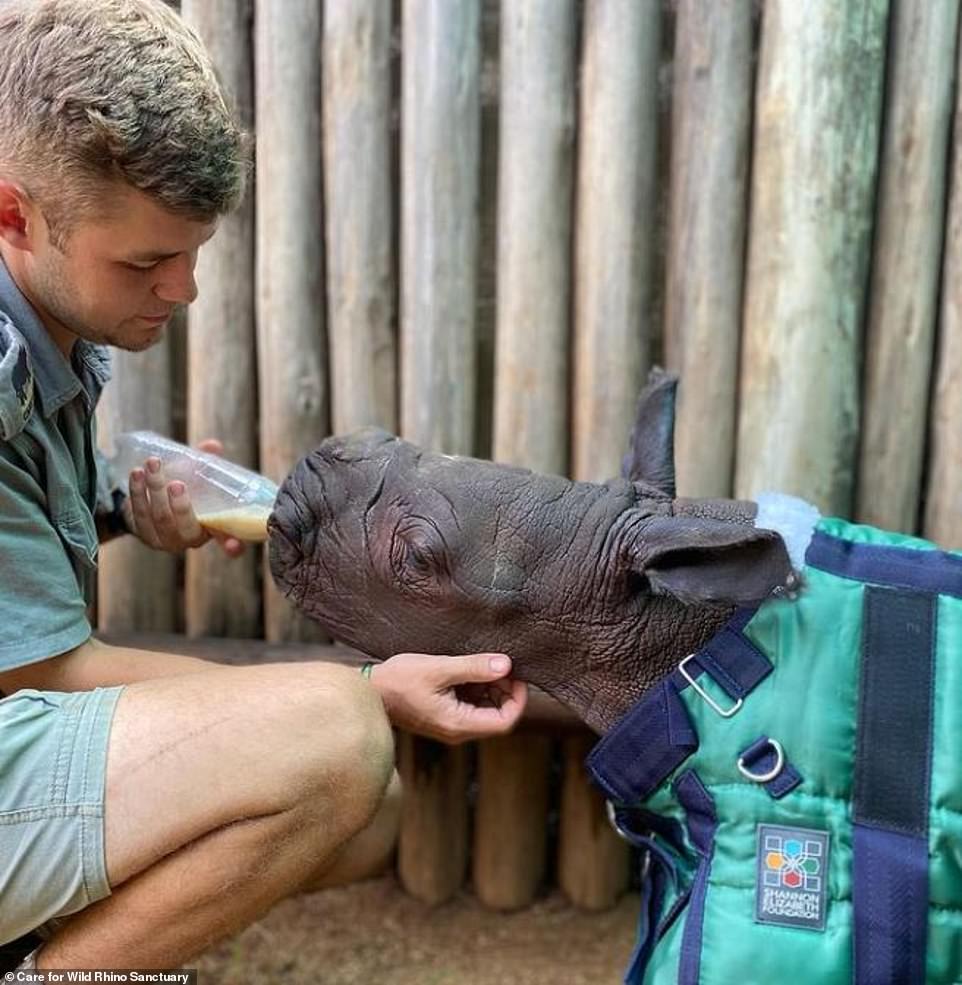 Daisy was rescued when she was just 12 hours old during a routine operation in the Kruger National Park in early December. Pictured here at seven days old being fed her bi-hourly milk bottle

When Daisy turned seven months old on July 9, the sanctuary shared the following post on their Instagram: ‘On this date 7 months ago, the tiniest of rhinos calves landed at Care For Wild’s helipad.

‘She took her first steps in the ICU. The months that followed would be some of the toughest and most challenging we have yet experienced.

‘Daisy took us and the vets on a learning curve like never before.

‘Despite being sample sized, she climbed into the hearts of thousands all over the world with her dinosaur ears, droopy lips and resilience to survive.

‘She has increased awareness for the plight of rhinos internationally and will forever hold a special place in our hearts. 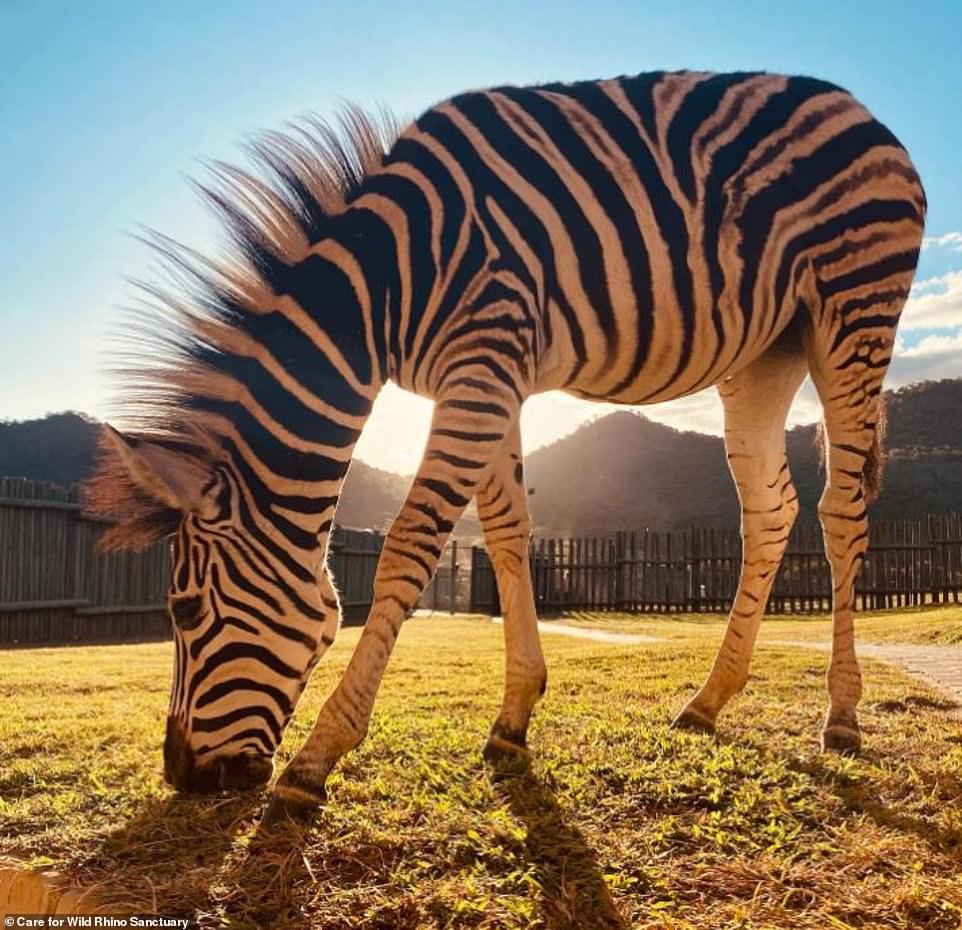 Modjadji, who herself had a difficult start to her life, took Daisy under her wing in the ICU. Pictured: Modjadji in June, enjoying the last warm rays of winter sun before the cold night ahead

‘One day she will be old enough and strong enough to enter the rewilding and release programme. For now she has a long road ahead but she is most definitely galloping in the right direction!’

Care For Wild said that while Daisy and Modjadji remain very close, the long term goal ‘is a successful release back into their natural ecosystems with their own species.’

The sanctuary said: ‘Whilst Daisy will eventually join the other orphaned rhinos and Modjadji will return to a herd of zebras, their unique friendship will always be a vital part of their rehabilitation journey.’